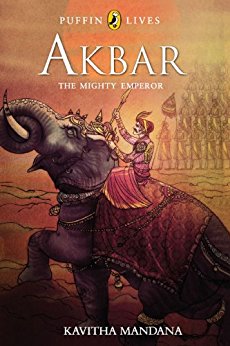 Every schoolchild in India is familiar with the history of the great Emperor Akbar who had ruled our country with strength, compassion and understanding. Not just a conquering warrior, he was also known as a great statesman, thinker and humanist, who succeeded in maintaining peace and harmony throughout his vast empire. This was no mean achievement, considering the various conflicts that could have torn asunder the population of such a diverse area. What remains unknown to the student of history is the adventurous aspect of Akbar’s life as a young boy. The author, Kavitha Mandana has described vividly the travails of Humayun before and after his son, Akbar, was born. She relates the excitement and thrill of the uncertain, nomadic life that Akbar led until he was finally crowned king at the age of thirteen. The story is as exciting as any adventure story and is sure to set the heart of the young reader racing.

From the frightening part where Akbar, still a baby, was dangled dangerously over the fort wall in the midst of firing between Humayun and his brother—and, unfortunately, enemy, Kamran—to his boyhood, the story retains the excitement of an adventurous tale. The reader will be interested to learn that Akbar was no brilliant scholar or ‘nerd’, in today’s language. In fact, he could never master reading and writing! He was, instead, a good artist, and loved the outdoors. He delighted in sports and games, horse racing, hunting, wrestling, sword fighting—in fact arts much more useful for kings of the time!

Kavitha Mandana goes on to weave the various events in young Akbar’s life into a fascinating adventure tale rather than dull historical text. Children will not only enjoy reading this book, they will also glean extra gems of facts to enhance their knowledge of history. The little asides, in the form of facts from the ‘history bugs’, add to the main narration by providing more information. Charming tidbits, like the ones entitled ‘The Golden Hind’, ‘Princess Rosebud’, ‘How to Capture a Fort’, and stories like the one about Rani Durgavati, add spice to Akbar’s story.

The author mentions the nine ‘gems’ or ‘Navratnas’ at Akbar’s court. Tansen, Birbal, Todarmal are names familiar to our children. However, I missed the rest for it is not clear who the others were. Another question that remains unanswered for me is whether Akbar really had a Rajput wife named Jodhabai, as in the film recently shown. These are just small gaps, however, that do not detract from the main telling of the story.

There is no doubt that this fascinating book needs to be read by all students. It will make history, specially the period about Akbar and the Moghuls, come really alive. [/ihc-hide-content]