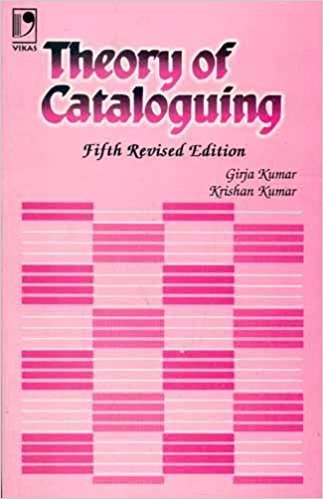 This study far surpasses the modestly expressed aspirations of the authors of being mainly designed to cater to the needs and requirements of ‘initiates in Library Science’. It should prove equally useful to many others interested in the techniques of infor­mation retrieval.As was evidently expected, a combination of vis­ion and practicality in the co-authorship of this pub­lication has lent not only quality of depth and authenticity but also practical facility to the inter­pretation and critical appraisal of the complex principles of cataloguing.Apparently for the first· time a comparative as, well as contrastive study has been comprehensively made of the two well-known cataloguing codes, namely, Ranganathan’s Classified Catalogue Code (CCC) and, the internationally practised Anglo-­American Cataloguing Rules (AACR). A commend­able attempt has also been made to suggest ways by which the principles evolved by the two can profit­ably be combined in actual practice. Principles underlying other codes are also suitably quoted and explained wherever desirable and necessary.