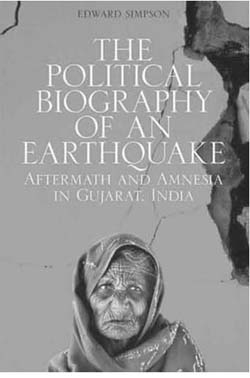 On the morning of January 26, 2001 when India was celebrating the 52nd Republic Day, a great tragedy befell Gujarat. As the earthquake struck, around 14,000 people died, houses fell into rubble, hundreds of villages ‘totally collapsed’ and oil spill was reported. The most affected areas of Gujarat were Kutch, Bhuj and Anjar. While most of us are aware of the disaster, the post-earthquake reconstruction process and its consequent impact on economy and politics are not much known. Edward Simpson, Professor of Social Anthropology at the School of Oriental and African Studies (SOAS), fills this gap in his book under review.

Simpson’s book underscores the importance of studying the aftermath of the Gujarat earthquake, which ‘had greater consequences for life in the region than the earthquake itself’ (p. 4). According to the author, doing ‘good’ work is not always ‘neutral’. ‘I do not think for one moment that “good work” is inherently bad, but it is never as neutral or innocent as people often claim and sometimes appear to believe. “Good work” is a form of politics and intention, just as it is, more obviously, in non-disaster times’ (p. 1).
In the author’s view, the aftermath— much more than doing ‘good work’ for the victims—served, among others, the purposes of capital. The post-earthquake reconstruction was used as an occasion to adopt a neoliberal paradigm. This was facilitated by a number of policy measures such as the deregulation of economy, reforms of public sectors, integration of the local economy to market, promotion of private-public partnership etc. In sum, structural reforms and imposition of market principles were done by development banks, corporate forces and state collaboration.
For example, the State Government gave huge tax concession and cheap lands to the industries involved in the reconstruction. The Government ignored the violation of environmental laws and industries’ neglect to employ locals, as per Government rules. As a result, some of the industries involved in the reconstruction work made huge profits overnight.
Apart from the economic dimension, Simpson also discusses the political aspect of ‘good work’. As he points out, the reconstruction was an occasion for installing Narendra Modi as the new Chief Minister. Modi, before taking over the reins of Gujarat, never contested any election and his coronation was aimed at arresting the declining fortune of the BJP in Gujarat. Within a few months after Modi was put at the helm, Gujarat witnessed one of the worst episodes of anti-Muslim violence.
Under Modi’s rule, the VHP got involved in influencing the reconstruction process. VHP senior leader Pravin Togadia inaugurated a newly-constructed settlement in the New Keshavnagar Township on a hot October day in 2002, ahead of the assembly election. Publicly sharing the dais with him were many prominent Ministers of the State. Togadia not only attacked Sonia Gandhi as an ‘Italian dog’ but also called for hanging jihadi Ghaznis (read Muslims), ‘secular Ghaznis’ (secular and liberal forces) and unseating ‘political Ghaznis’ (the Congress) (pp. 109–110).
While Togadia appealed to Gujarati voters not to vote on caste lines, he simultaneously exhorted them to cast their votes on the basis of religion, their Hindutva identity. Despite Togadia’s call for Hindu unity, the Keshavnagar settlement excluded dalits along with Muslims (p. 110.) As Simpson argues, such exclusion, based on caste, class, religion etc., was inbuilt in the reconstruction and rehabilitation. In other words, much of the old forms of social inequality were carried into the new settlements as well.
While the earthquake suddenly turned thousands of people into victims and sufferers, there are many others who were ‘waiting for such an event’. One of them was the ‘carpetbagger’ Derek Slade, a British education ist. In the wake of the earthquake, he set up a school in Kutch for orphans. Later, he was sentenced to twenty-one-year imprisonment by British court after he had been found guilty of being a ‘paedophile’. Among other charges, he was accused of drawing cartoons of sexual acts and beating children up.
Simpson then moves to history and memory. For instance, he narrates the construction of Shyamji Krishnavarma in the post-reconstruction period as a Gujarati Hindutva icon. A newly rebuilt airport in Kutch and a university were named after him. Born in the nineteenth century, Krishnavarma studied law in England. In 1897, he left India and settled in Highgate, north England, where he formed a society for Home Rule in 1905. He also ‘funded’ Vinayak Savarkar’s education in London. Afterwards, Krishnavarma left for France and then Geneva, for the fear of arrest on seditious charges, where he died in 1930. Due to his opposition to the Congress for its alleged domination of ‘Anglo-Indian autocracy’, he was iconized as an alternative to Gandhi by the BJP, for new Gujarat. Similarly new roads, settlements, buildings were named after other Hindutva icons.
In his quest for going beyond the obvious and crude facts, Simpson enters the domain of the human psyche to understand how people themselves perceived the causes of the earthquake. As he concludes, the human explanation of big events like the earthquake are often shaped by their location in the social world. That is why, the followers of Sufi-Muslim culture believe that the curse in the form of earthquake was cast on people because they deviated from great Sufi tradition under the influence of ‘puritan’ Islamic reform movements such as Ahl-e-Hadith and Tablighi Jamat. A number of other explanations were also offered about the earthquake such as decline of caste order, exogamous marriage, commercialization, consumption, decline of morality/ spirituality.
To conclude, Simpson’s work has a large canvas and it deals with multiple themes and actors, often ignored by mainstream policy analysts and corporate media. This book is a fine evaluation of the roles of major actors of the aftermath such as international aid agencies, development banks, religious outfits, political parties, State Government, construction contractors, and captains of industry and draws our attention to often-ignored political aspects of ‘good work’ carried out after any disaster.

Narratives Of Culture And Gender
April 24, 2017