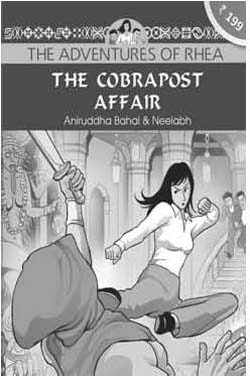 The rise of indigenous graphic novels in India is not entirely steady or even smooth. While the premise of a graphic novel is exciting, it’s not easy to come across a writer-illustrator duo who can pull off the task with panache. In the case of The Cobrapost Affair, one can say they almost accomplish it, if it only weren’t for the absurdity of the tale that ensues.
.’

Rhea Baughman, a fearless journalist out to expose drug scams and even terrorist activities through Cobrapost, an online media organization, has been tipped off about a murder that’s about to take place at a hotel. Rhea enters the hotel and quickly dons an old man disguise to avoid coming under the scanner of a police duo—Sharma Verma, who have been trying to get hold of her for various reasons of their own. She bumps into Major Lee, a plump, easy going alcoholic ex-marine from the US who ends up coming back with her to her house when Rhea is unable to stop the murder.
A string of murders have taken place and all the victims are international spies. While Rhea is still pondering over the strangeness of it all, she is called by her panicked mother who informs her that her father has been kidnapped by the Taliban. What follows is an incredible story of Rhea saving her father from Afghanistan, coming back to India and trying to save the spies (who are actually alive) and in the captivity of some unknown person called The Voice.
The story meanders between CIA agents, ISI agents, RAW agents and a number of complicated twists and turns later, which soon becomes absurd when The Voice informs his sidekicks that he wants to ‘sacrifice’ these spies because they are descendants of the people who killed his Thugee ancestors. He reveals that once his forefathers are avenged, the ghosts of his ancestors will give him great yogic powers.
Whatever.
By this time, the reader has no idea what is going on. What is Rhea doing in all this apart from executing some cool Krav Maga moves to anyone who tries to attack her? The story is one glorious mess, to say the least. Major Lee who soon turns into Rhea’s sidekick is the source of some amusement at various points, although his antics where he starts acting as a dog at the house of an Afghan minister are ludicrous. Of course, thanks to these antics they are able to trigger the opening of a secret passage where Rhea’s father has been held prisoner. How convenient.
I can appreciate that terrorism and the Taliban are not sugar coated here, but why is the resolution so simplistic and almost childish? (There are actual cobras in the Cobrapost organization but they’re all fake and they use them to get people to talk? How come hardened spies and agents can’t deduce that those cobras are fake?) If the reasoning is that this is a graphic novel and that allows for a certain level of simplicity, then why choose such a real and hard hitting scenario? And wait, was that a panel with a suicide bomber, who Rhea pushes out of the window, and he falls into the swimming pool and boom. The bomb detonates and what? People around them have their clothes torn off Andaz Apna Apna style? If that treatment can’t be forgiven, then consider the sheer absurdity of the Thugee ancestors, or that the house where the CIA and other diplomats are holed up is right next to the farmhouse where the spies are being held prisoner.
The illustrator Neelabh manages to create a vivid and colourful world and it’s indeed a treat to see how he executes scenes with chaos. The detailing is beautiful and intricate. Now if only the characters looked Indian. Or made a little more sense in their shenanigans.
Andaleeb Wajid is the author of eight novels—Kite Strings, Blinkers Off, My Brother’s Wedding, More than Just Biryani and The Tamanna Trilogy. Her Young Adult novel When She Went Away has been published by Duckbill in October, 2015. Andaleeb enjoys writing about food, relationships and sometimes even weddings. Andaleeb lives in Bangalore and is currently heading the marketing team of a software company, Quadwave.