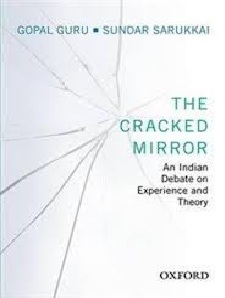 When was the last time that one has come across a co-authored book that takes the form of an explicit debate? Among the qualities that make this book so stimulating, its genuinely dialogical structure must come first. Expanding upon a core set of articles and responses that first appeared in the Economic and Political Weekly, the eight chapters that constitute the book are evenly shared by the two authors—Gopal Guru, a political theorist, and Sunder Sarukkai, a philosopher of science. All the themes at issue are, however, only partially indicated in the book’s title and sub-title. While questions relating to experience and theory are indeed a running thread, the ‘cracked mirror’—which presumably can only produce distorted or fragmented images of its object —refers to reflections on the very specific problem of untouchability. This is what is fundamentally under interrogation in the discussions and, at times, the disagreements that emerge in the overall debate over the relationships between experience and theory. This would also be one of the reasons why the book has been called an ‘Indian debate’. The second reason, which appears to concern Sunder Sarukkai more than Gopal Guru, is what he identifies as a questionable dependency on western theories, and the effort he makes, by way of response, to dwell on Indian traditions of thought and experience.