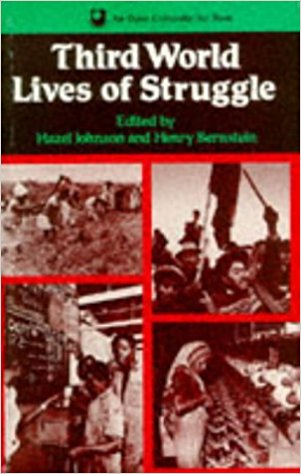 This is a modest book that nonetheless breaks a new path in studies of societies on the capitalist periphery. It is a collection of twenty items intended to reveal—as far as possible in their own words how the masses of labouring—people in the Third World survive, resist, protest and impose themselves on their ruling classes.
The book falls into three main parts, dealing in turn with struggles on the land, in the towns and by women (rural and urban). Each of these has a general introduction, and so do most individual items. The book is concluded by a fourth section on ‘understanding struggles’.
The individual items are varied both in character and length. There are poems, songs and sayings of the people, such as the collection of sayings of Mexican Indian peasants. There are autobiographies of, or interviews with, labouring people; a Guatemalan woman guerilla, Mozambican peasant women, an urban petty-trader-cum-petty criminal in Colom¬bia. There are also such items on or from their leaders, as with the now world-famous Bolivian miner’s wife, Domi¬tila, and the equally famous Brazilian engineering worker, Lula.

There are journalistic reports on, for example, small-scale engineering and cigarette making in India. There are a few analytical items by academics—resistance to rural ‘development’ in Senegal, prostitution and sexual poli¬tics in Kenya, hidden protest amongst African workers. Only one item comes from a famous revolutionary leader, Mao Tse Tung, though this also deals with grassroots struggles—the peasant move¬ment in Hunan in 1927.

It is, of course, this focus on the grassroots that is one of the main achievements of the collection. The editors are hereby helping to free their ‘First World’ readers from the media-reinforced illusion that the only political power in the Third World is that of its increasingly repressive govern¬ments. They may also help to liberate their more radical or activist readers from the illu¬sion that the bitter exploita¬tion and misery in the Third World can lead easily and rapidly to generalized and successful mass uprisings. This illusion has been in part created by revolutionary elites in the Third World—and has been reinforced by radical academics who concentrated on these rather than on the masses. Both points are made in the editorial. Concluding their moving but sobering collection, the editors stress that the experience of collective struggles for even immediate and limited ends can dis¬close both the need and potential for fundamental and longer term transfor¬mation.

This statement, in itself, would not carry much weight if it were not for the variety of individual and collective sur-vival strategies, of forms of organization and activity that the collection reveals. But before dealing with these, two other important features of the work need noting.

The first is the explicit identi¬fication of women as a social category and political force. One-third of the collection is devoted to women—their conditions within the domes¬tic unit, rural or urban labour, and the very different ways they struggle against their particular oppression. As the introduction to this section points out,
the readings illustrate how the different struggles they face are determined not only by gender but also by class, caste and ethnic group.

The sex, race and class issue arises clearly in the contribu¬tion of Domitila—at least in so far as she contrasts the concerns of Latin American working class women with those of middle-class and/or North American ones. There is rich material here for debate on relations between sexual and class struggles.

The second important feature is that this is primarily a re¬source for self-education of working people. I do not want to exaggerate the value of this work for adult education. And I do recognize that it is pro¬duced by an institution con¬cerned with university-level adult education. But because most of the material is close to the daily lives of ordinary working people— however exotic their living conditions and circumstances might be—there is a possibility for direct access to them which has previously only been pro¬vided by film and television.

Some of the forms of orga¬nization are traditional and familiar: the union, the van¬guard political party, the peasant association—and the women’s wings of such. That they are traditional does not mean that they are dying. On the contrary, many of the extracts remind me of how much life there is in the now-almost-century-old organizing strategies.

Other aims and forms are comparatively new—or little recognized—and suggest a growing capacity amongst labouring people in the Third World to create and control their own lives. We may here, perhaps, contrast the male-dominated cooperative and peasant association of Aida Hernandez in Peru with the Annapurna—a cooperative of women food-preparers in Bombay. The Annapurna was created on the initiative of a woman trade unionist and against the ‘class’ opposition of male unionists to such ‘petty-bourgeois’ activities. The cooperative was based on the specific needs of the women and reflected their specific capacities. The perceptions, strategies and forms of self-organization of the Senegalese peasants resisting the ‘develop¬ment’ projects of their own, the French and the American bourgeoisie, also suggest a remarkable capacity for self-determined and self-organized activity. Then there is the Brazilian engineering ‘worker, Lula, engaging himself with the details of effective worker protest and organization under a corporatist regime, with the character of a planned mass worker party, and with the relationship between speci¬fically worker and general democratic struggle. His words may reflect a more common feeling about the established and revolutionary elites who have so far dominated (or dominated our perceptions of) political struggles in the Third World:

Maybe it is just that we believe in our own strength to solve our immediate pro¬blems… I think that this is the basic difference between the workers before… and those of today. The worker started to see that the people talking about freedom and using the term ‘working class’, were in fact far remo¬ved from him. After having been massacred far a long time, workers started to believe that they could resolve their own problems.

I said that some of the aims and forms are little recognized. Such are the ‘hidden’ forms of resistance and struggle identified by Robin Cohen, in one of the academic/analy¬tical items in the book. Although Cohen is here talk¬ing only about workers and only about Africa, it is clear that it is only when we are sen¬sitive to all forms of protest amongst all kinds of labouring people that we will free our¬selves from treating the masses as victims—and be able to work out strategies to build on the attitudes and capacities thus revealed.

The concentration on local and immediate experience and struggle does mean that certain crucial elements are lacking even for a comprehension of these very things. One of them is evidently national strategy—the bread-and-butter of both the dominant and the opposi¬tion elites. This is an inevitable result of the focus of the col¬lection. What, though, of rela¬tions amongst the working people whom the book shows as being divided in so many ways? The editors emphasize the multiplicity of economic, sexual, cultural and ideological divisions between different types of labouring people. And there can be little objection to such pessimism of the intellect. But any optimism of the will requires revelation of the pos¬sibilities for unity amongst those whom capital, state and patriarchy have so divided. The ‘differences and unity’ section of the Conclusion only deals, in practice, with unity within the differences (e.g. amongst peasants rather than between these and workers). Yet both the Introduction and a number of the selections reveal the extent to which even the individuals dealt with carry out multiple or serial roles with respect to capital. What would seem to be a weakness can also be a strength. Rosendo Hueneman is a repressed indi¬gene and a peasant and a worker. The Annapurna coope¬rative members are working-class (by marriage) and mem¬bers of the oppressed sex and petty-commodity producers. Yet the problem of combining such roles and identities in a struggle against capital, patri¬archy and state is nowhere raised in the book.

This sort of question is one that those reading or using the book will need to sort out for themselves. So will they also need to sort out the problem of international solidarity bet¬ween these labouring people and those elsewhere—another element crucial to the self-liberation of the masses.

The collection has been pro¬duced by the Open University in the UK, and is intended for workers’ and women’s educa¬tion as well as for university-level adult education. It is referred to as a ‘resource’. But there is nowhere any indica¬tion as to how this tool might be used. Indeed, it seems to me that it may fall between two pedagogical stools in pre¬senting both ‘voices’ and aca¬demic analyses (of the editors themselves or of the occasional contributors). The problem here is that the analyses tend to provide the answers to the questions that the voices pose. In a resource for self-education this is a certain shortcoming. If we have here a problem of excessive direction, there is also one of insufficient advice. Such a resource book would have greatly benefited from a resource list—names, addres¬ses, books and periodicals—enabling and encouraging readers to extend their know¬ledge of this area.

If the presence of academic contributions to this work is a certain anomaly, so is restric¬tion of the Asian contributions to those from India. Or per¬haps one should put this the other way round, because concentration on one country certainly allows for more depth than selection from five or ten different ones. Chile (or Brazil) and Nigeria (or Tan¬zania) could have provided interesting cases from the other continents.

I do have one major reserva¬tion concerning the form of the book. It has—presumably to keep the price down—been literally crammed within its not-particularly-striking cov¬ers. The same typeface has been used for both introduc¬tions and the selections imme¬diately following, making it sometimes difficult to see which is which. This book is one that cries out for the layout of a popular teaching aid. It needs space, illustra¬tions and maps. One hopes that if it is to be translated or reprinted the opportunity will be taken to present the unique material in the manner it deserves.

It strikes me, in this connec¬tion, that this work could have a more radicalizing impact in the Third World itself than in the West. Whilst people in the West can get most of the origi¬nals from which this work is drawn, and whilst they have growing access to materials of all kinds on labouring people in the Third World, this is not true for the Third World itself. It is difficult, if not impossible, in India and Nigeria (to men¬tion the two countries I know best) to find material of this kind on the two other conti¬nents. Radical educators in such countries are therefore dependent either on what educational materials are available from international agencies, or on publications of particular socialist tendencies (communist, social-democratic, Maoist). Such materials are not only highly processed ideolo¬gically they are also often narrow, archaic and arid. Those Third World educators who are trying to escape from technocratic or party-political orthodoxies, and who would like their students to be con¬fronted with other Third World realities, will welcome this book. They are unlikely to complain that it has been pro¬duced in as cheap a manner as possible.

Peter Waterman is at the Institute of Social Studies, The Hague, Netherlands.