The Poet and Rebel 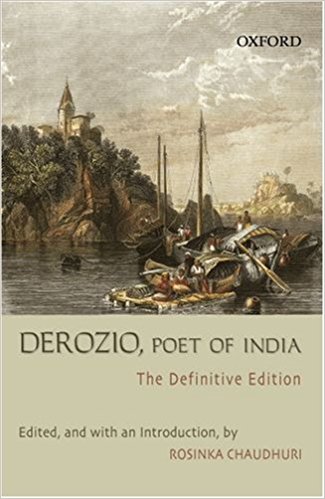 Henry Louis Vivian Derozio (1809–31), a Eurasian of Portuguese Indian ancestry, has been described as the first Indian poet to unleash the Age of ‘Modernity’. Derozio has been traditionally portrayed as a harbinger of ‘Indian Renaissance’ by many a critic.1 But there has been dearth of essential information on his life, work and milieu, though his poetry has been read for more than a century in the departments of English in several Indian Universities. Derozio, Poet of India: The Definitive Edition edited with a scholarly introduction by Rosinka Chaudhuri comes to fill the gap in a major way. The blurb of the book, which presents Derozio as, ‘the first modern Indian to write of the incumbent nation extensively in English,’ makes explicit the editor’s position on Derozio in several ways to which I shall return after a while. This critical and authoritative work, as the title indicates, brings together for the first time most poems of Derozio as uncovered from the pages of the India Gazette, the Bengal Annual, the Kaleidoscope and other newspapers and magazines, along with essential background information, editor’s notes to his poems, prose writings, correspondence, polemical and personal responses published during his lifetime and posthumously.

Chaudhuri who worked on Derozio earlier as part of her research has now delved into archives, both the India Office and the British Library in London as well the National Library and Victoria Memorial in Calcutta. She has also worked with individuals in Bengal, who continue to commemorate Derozio by publishing his poems in contemporary periodicals. This meticulously and brilliantly researched volume on Derozio stands out as a model for similar much needed work on other writers, cultural figures and socio-cultural formations of the crucial nineteenth century and also of the twentieth century.

The travails of unearthing fresh documents on Derozio’s writings and their context as given by the editor in the preface speaks for the depth of research that has gone into this critical volume. For instance, when Rosinka Chaudhuri finally gets hold of Toru Dutt’s essay, ‘An Eurasian Poet’, after much effort with many scholars assisting in libraries situated in three continents, she finds that the essay was not about Derozio at all but on a Mauritian poet who wrote in French by name Leconte de Lisle. Her scholarly introduction provides a fuller picture of Derozio throwing light on his scholarship and immediate surroundings. The title of Rosinka Chaudhuri’s book could, however, be controversial. But she justifies the title by clarifying that the word ‘definitive’ according to the Oxford English Dictionary is an edition of a book which is ‘most authoritative’. True to the scope of this meaning, her book covers most of Derozio’s works including poems, essays, letters and other correspondence, which have remained undiscovered for more than 150 years.