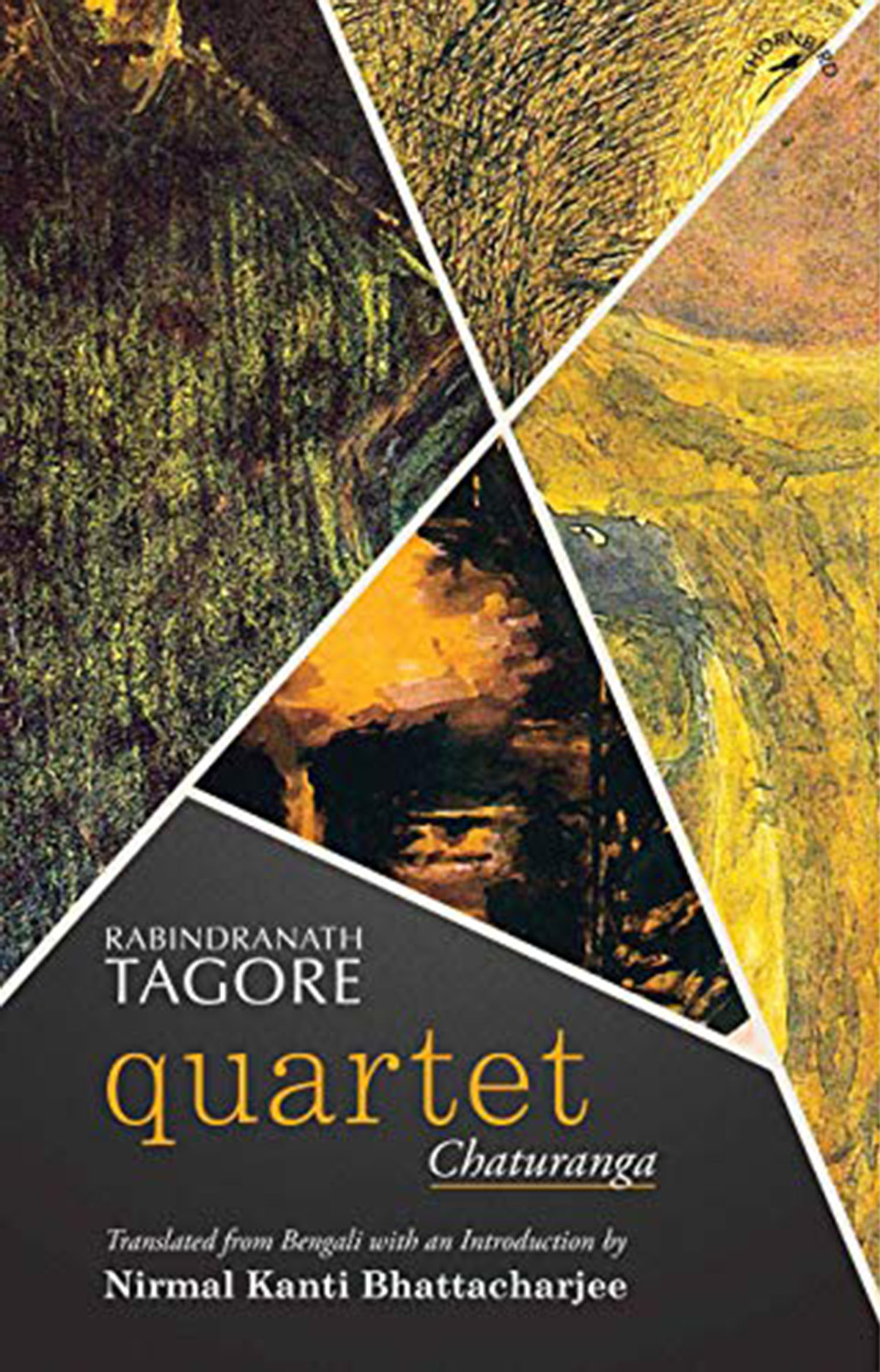 Rabindranath Tagore’s androgynous imagination finds fulsome expression in the two books under review. How he extended his understanding to the mysterious secrets of women silenced by patriarchy remains a conjecture. Periodic translations open up the question in various social contexts, so today we might find a new perspective to Tagore’s ‘solutions’ for women’s issues and look for the gift of ‘agency’.  A translator’s responsibility, to my mind, is to render the early texts into a language and thought-pattern that appeal to the contemporary reader; otherwise there may not be much justification for attempting fresh translations as the decades roll by. Bhattacharjee’s work reads easily without losing the flavour of Tagore’s time and it preserves the distinct quality of the voices of the men and women in the novellas without allowing standard English to flatten out the individualism.

The first book, Chaturanga, (1916) suitably titled Quartet by the translator, suggests an allusion to TS Eliot, and it transpires that the theme of competing centres of consciousness is common to Eliot and Tagore. Not only that, Eliot’s reference to the Bhagavad-Gita in Four Quartets creates the bridge between Tagore’s depiction of faith and disbelief  debates in early twentieth century Bengal and England to our present-day contestations about religious practices. Tagore, growing up during the reformist era in Bengal, and in a home where the Brahmo Samaj’s ‘rationalism’ held supreme, was privy to the intellectual positions on various paths to salvation. The range from orthodoxy to atheism is covered in the debate and enters fictionalized form in the novella, entirely pertinent to our times as well.

The story of Quartet clusters around four characters, among whom Damini, the only woman, emerges as the key figure. A young, attractive and childless widow, her husband’s Will has gifted the mansion and its possessions, including the widow, to a spiritual guru—a deeply ritualistic preacher immersed in bhajan-kirtan routines and esoteric discourses. Among his followers is Sachis, the scion of a wealthy family who was known to be an atheist but who unexpectedly turned orthodox.  Sachis’s friend Sribilas tries to understand Sachis’s volte-face. Arriving   at the guru’s ashram, he becomes embroiled in a puzzling romantic triangle. At first, the widow Damini is a shadowy figure efficiently conducting the household chores but she soon emerges as a wilful firebrand rebelling against the patriarchal assumptions of the men. She makes herself visible and voices her contradictory opinions even as she chafes at her own incarceration as a service-giver to the guru and his male entourage. At one time Damini folds her hands and tells them, ‘For God’s sake do not ask me to dive any deeper. I will survive only if you people give up on my salvation’ (p. 58).

Tagore’s sensitivity to Damini’s helpless anger and then her bold flaunting of sexuality charts a fascinating passage in psychological understanding. In the famous scene in the cave that readers of the original Chaturanga will surely recall, the repressed urges of all the characters are depicted through the metaphor of a ‘primitive beast’. Thereafter the power equations change, everyone is circling around Damini but a widow’s dependence on male authority is a factor of the times that Tagore cannot obliterate.  The men are equally caught in the social systems, whether they relate to caste hierarchies, religious bigotry or the domestic economy. Tagore’s achievement is in presenting the debates in a complex manner, each character changing positions as though pitted against itself and also the hegemonic order. Is there a place for an intellectually alert woman? Not within the system, but surely in Tagore’s novels as he was fascinated by the efflorescence of the female intellect.

The second story Dui Bon (1933) translated as Two Sisters is even more daring in presenting another set of four voices within a context now quite  famous in Tagoriana, ‘Women are of two types; that is what I’ve heard from scholars. One is of the mother category, the other is of the lover’ (p. 9). The inner psychology of Sharmila, the motherly woman, and Urmimala the effervescent romantic is explored with a rare understanding of how women curtail their instincts so as to subscribe to yardsticks of social conduct. When the perfect wife and homemaker Sharmila falls grievously ill, she invites her unmarried but betrothed sister Urmimala to attend to her and her home. The motherly care and gravity of Sharmila is a contrast to Urmimala’s mirth and charming lapses, and the workaholic husband suddenly discovers an alluring, new facet to his domestic life. Urmimala too finds the brother-in-law a delightful contrast to her sombre, studious fiancé. Hence a love quadrangle emerges with questions about propriety versus personal attractions.

Unlike the intellectual discussions in Chaturanga/Quartet, this novella is full of irony and satire. There are excesses of meticulous husband-care such as laying out a fine kurta, starched dhoti and silk slippers on Sunday for a man who prefers to spend his time in the office. There is also the over-solicitous fiancé who makes a rigid timetable for his ‘beloved’ that prohibits all fun and games.  The two sisters, creators and receivers of such gender biases, are not very self-referential except at the end of the novella by which time the conflating of the categories of wife and lover has become a dangerous game. Shashanka goes as far as to state to Urmimala, ‘I am sure you know that I love you, and your Didi is a goddess incarnate. I respect her more than anyone else in this world. She is out of the world, much above us’ (p. 69).

Without revealing the denouement of these books, I would like to raise an issue of feminist concern. Why do men create problems based on their assumptions of unequal gender relations? Tagore’s answer would probably be grounded on the reality of men being the decision makers in patriarchal structures. But Tagore writes his own rebellious postscript in his androgynous voice according to which the women resolve the problems and find liberation. In a worldly sense, abstinence, departure and death may not be valuable attributes but in Tagore’s moral universe a woman’s insightful knowledge of the ‘other’ leads to right action.

The translator’s role in conveying the nuances of history, language and culture is crucial. Nirmal Kanti Bhattacharjee’s introductory essays show him to be aware of the challenges and the resulting books are testimony to his responsible undertaking.