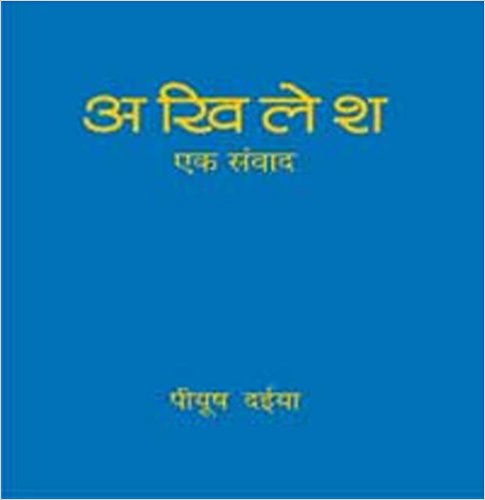 Among the many qualities of Piyush Daiyas book of conversation with artistAkhilesh, the most inspiring is his ability to efface his minutest traces from the text. The entire dialogue comes across as a selfrevelation by the artist, as if he conversed with himself in the darkness of a summer night, or standing against his canvas, and Piyush merely overheard him.

He does give the artist absolute space. Still, he is not a Joycean narrator, paring his nails in a corner. Despite converting the questions into a tool for Akhileshs selfexploration, uncover the sentences and he will emerge as the guiding force, prompting the artist to unravel the soul of his canvas, weaving the meandering conversation into a narrative. The conversation, hence, epitomizes the gurushishya parampara of Indian mythologyan overzealous pupil engages the master in an engrossing enquiry.

Piyush begins with the innate queryHow does the interplay of colours and canvas create a form Is it the passionate copulation of an artist with colours, or a violent act, or meditation performed in solitude

Akhilesh responds: Yes, there is violence and it lies in aggressively bringing the colours into context it is mental, not physical. Wherever there is creation, there is violence. One colour indulges in violence on another, only then do they find a harmony.Rarely has conversation on art been so engrossing and overwhelming, exploding onto a wider horizon. Here you learn and locate the centrality of colours for an artist, that the dab of a hue on canvas is not a tool to create a figure or discover an abstraction, but a realization that in the kingdom of art, colours rule supreme.

I never strive to construct shapes in a painting. I never endeavor to realize any form. I create a colour and a shape of that colour forms in the painting this is the innate condition of forms in a painting and it is possible that they are not found anywhere else, only here what you term as forms, Id rather call chromatic forms.

As Akhilesh proposes and establishes his constitution of art, he bares before you a universe of pristine forms. Abstract artists face the perennial complaint of operating in an unreal world, a world that has no semblance to reality and exists, in an exclusivist manner, only for a select few.

Akhilesh registers his protest. His universe is as tangible as could be. His abstractions discover hitherto unknown forms through his colours, marking an attempt to transcend memory in the creative process.

The young Franz Kafka wrote his first novel, Amerika, with elaborate details of a land where he had never gone to, nor would ever go. This, in a way, was an attempt by the great writer to escape from the trap of memory which many writers so often find themselves in. Akhilesh shares a wonderful experience: Once, he went to Banaras with a distinct desire to visit Tulsi Ghat. Despite staying for ten days, he couldnt visit the place. Still, he went on to paint it guided by his imagination. The result Everyone exclaimed it was Tulsi Ghat!

The conversation offers great learning in colours and artistic processhow a hue situates and reinvents itself on the canvas to mark its distinct existence. It also sensitizes us towards the possibilities embedded in the chromatic code represented through a sheer visual. As you pass through a visual, howsoever banal, you begin attempting to locate the inherent Maya caused by the interplay of colours and forms that you ignored earlierbeneath this visible form lives a subtle abstraction that yearns to be given a form.

I am impressed by the drama inherent in the visual this drama lies in colours whatever you view and feel in the Mona Lisa is like reality and dream. The concrete form of the Mona Lisa invokes an abstract feeling within you.

Akhilesh emerges as a brilliantly perceptive painter, who lends pristine phrases to his abstractions and situates his colours in their exactitude.

Such authority over words, amply visible in his other works, complements his impeccable strokes on the canvas. He is among those rare artists who actually ponder over their workfor whom the painterly world is as much conceptual as perceptual. And, of course, sensual too.

A significant component of Akhileshs painterly grammar is his insistence that there is nothing original and experimental in art.

Experimentalism is a notion that has no connection to the art of painting. When I paint, I am not conducting an experiment I am trying to impart colourcoordination from my experience, in which my imagination accompanies me.

A provocative proposition. But here, unfortunately, Piyush doesnt prod enough, like he does elsewhere. Doesnt an attempt to fashion rang sangati(colorcoordination) constitute an experiment Akhilesh may have a particular aversion for this nomenclature and use a different onenevertheless, he tests and applies his experience and imagination, a process that in itself is experimentation.

The book is a primer for anyone desiring to initiate a conversation with a master, reflecting Piyushs unrelenting groundwork. If this work is read for the sheer pleasure of an odyssey of form and hue, to learn that when an artist moves from one composition to another, he does so only by refuting his existing works the distinct narration Piyush devises offers ample signposts along the journey.

But can an interview, a mere exchange of questions and answers, have a narrative Sure, when you consider the long tradition of samvaad in Indian thoughtYamaNachiketa, for instance. Like any noted narrative, you can enter this conversation from anywhere. Open the book, begin from any chapter, any paragraph, and you are on the journey. There is no beginning or end. A special language and narration was needed to express the inner self of the artist, and Piyush realizes it in its exactitude.

The conversations, though, suffer from an overwhelming cerebral presence. Their unusually polished formgreat for a novel or a text on literary theorydeprives the conversations of breathing space. With an arduous tilt towards deliberations on art and aesthetics, Piyush ignores that in any great conversation, responses must not appear tailormade. He doesnt record those hesitant moments when he, or the artist, fumbled for the right word; doesnt retain the lighter moments either. Like a great canvas, such conversations are best left with a little spot on their texture, a tiny peck here, a subtle freckle there.

That said, Akhilesh: Ek Samvaad should safely rank among the works of this decade.

By suggesting that his journey began from the external world and found its culmination within his own self, Akhilesh underscores the strand of the Indian thought that asserts that an artist merely manifests himself through his art. You discover, not the ephemeral external, but the eternal entity through your self.