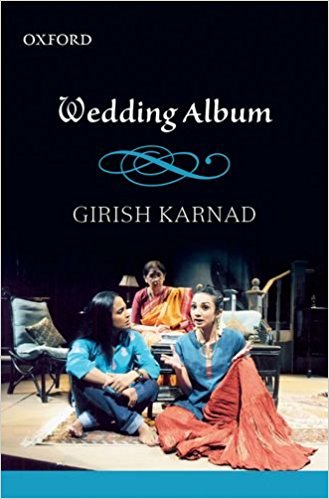 I must begin with a double disclaimer: I am not familiar with the entire body of Girish Karnad’s dramatic work, and I have not yet seen a stage performance of Wedding Album, Girish Karnad’s newest play. Having gotten that out of the way, here’s getting down to the business of reviewing a new, unusual offering from one of the best known dramatists in the country. In a word, I was surprised. Not only is Wedding Album a marked departure from other Karnad plays, it also breaks rank in its apparent refusal to delve deeper into its own earth. Karnad is known for his ability to reach into Indian history, myth and folklore and for his usage of this very groundswell to unsheath the truths and tragedies of our society. When he chooses to focus on a theme, a character, or a point in time, he seems to do so in a clear-eyed, hard-nosed way. His is not simply an attempt to understand those characters and their motivations; he also investigates and exposes.

Karnad has given us Tughlaq, whose desire to shape history not only rode roughshod over his own countrymen, but who also showed us how easily ambition crumbles. He showed us that, perhaps, such ambition itself is a crumbled edifice. He has also given us Flowers, a monologue that gently unravelled as did the fate and faith of its main protagonist. Here, he showed us the complexity of a world in which one man’s faith can redeem, elevate, destroys, entrap and ensoul, all at the same time. His characters—even when they are not physically present on the stage—make you wonder about the depth of their souls much after the actors have taken their bows.

What surprised me most about Wedding Album is that it does none of the above. The plot seems to be toying with time and media as the play unfolds. A twenty-two year old girl, Vidula, is introducing herself on camera. That is, a video is playing (one assumes, she will appear to address the audience directly) while Rohit, her brother, and his female boss, a television producer, discuss the possibilities of converting this story into a television serial.