Re-Remembering The Erased Past 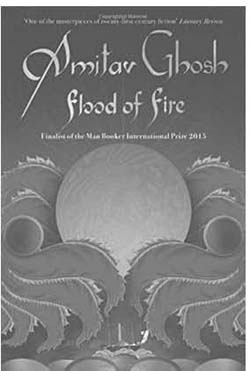 In an interview in 2012, Amitav Ghosh had described his art thus, distinguishing his writing from that of the historian: ‘History is like a river, and the historian is writing about the ways the river flows and the currents and crosscurrents in the river. But, within this river, there are also fish, and the fish can swim in many different directions. So, I am looking at it from the fish’s point of view and which direction the fish swims in. So, history is the water in which it swims, and it is important for me to know the flow of the water. But in the end I am interested in the fish.’

Ghosh may claim to be interested only in the fish, the wonderfully evocative characters who populate his fiction, but he also has the rare ability to make the river, the historical places, peoples and things in which his fiction is set, come alive for his grateful readers.

What started Ghosh off, some ten years ago, on what would eventually become the Ibis Trilogy—Sea of Poppies (2008), River of Smoke (2011), and Flood of Fire (2015)—was his interest in the Indian diaspora, more specifically his attempts to understand to what exactly the Indians who settled in places like the Caribbean and Mauritius owed their often fantastic journeys. One of the fascinating things about this diaspora—which has given us some of the world’s most-cherished cricketers (think Sonny Ramadhin or Alvin Kallicharan or, closer to us, Shivnarine Chanderpaul) and a Nobel laureate to boot (think V.S. Naipaul)—is that its members started out as little better than slaves, as indentured labourers, from the very heartland of India. This was in stark contrast to other diasporas, such as the Dutch or the Irish or the English, most of whose members came from coastal areas. And, indeed, it seems but logical that those who live closest to the sea should also be the ones who are most likely to cross it, whether in search of better lives or captured by what we would now call human traffickers. Yet, strangely and counterintuitively, the members of the earliest Indian diasporas came from settlements hundreds of miles from the coast, from landlocked villages and families who demonized and dreaded the ‘black water’ (kaala pani). So what was behind the strange migration of these men and women from places so far inland to these far-off lands? The answer: opium. These men and women travelled vast distances as part of the massive opium trade of the British East India Company.

It is a powerful testament to the ability of rulers to whitewash their misdeeds that very few even quite well-read and knowledgeable Indians know just how important opium was to the economy of the British in India. The Honourable John Company was not just ‘the biggest drug trafficker of all time’, but also directly responsible ‘for the deaths of 17 million Chinese from opium addiction’ (as Mike Marqusee put it in his review of the British Library’s 2002 exhibition on the East India Co.). And yet, and yet… In Ghosh’s own words, ‘Opium was the fundamental undergirding of our economy for centuries. It is strange that [even] for someone like me who studied history and knew a fair amount about Indian history,