Portraying the Evolution of a Community 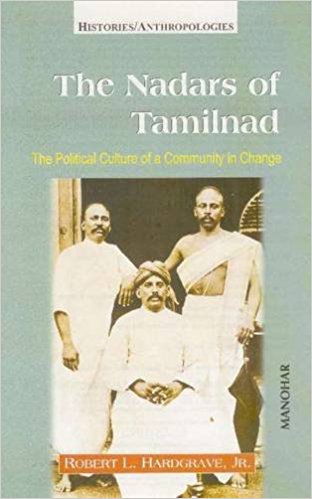 Portraying the Evolution of a Community
Y. Vincent Kumaradoss
THE NADARS OF TAMILNAD: THE POLITICAL CULTURE OF A COMMUNITY IN CHANGE by Robert L. Hardgrave Jr. Manohar, 2007, 314 pp., 895
April 2007, volume 31, No 4

This book came out in 1969, it was hailed as more or less a landmark. It marked a refreshing and most stimulating departure that defied the commonly prevalent notion that the caste system was overtly rigid with no scope for upward mobility. In mapping the rise of the Nadars in power and wealth from a lowly position just a shade above untouchability, Hardgrave weaves an interesting and fascinating story. Hardgrave’s portrayal of Nadars’ fanciful theories about their origin and their ability to convert the available resources to their advantages is lucid and immensely readable. When history dawned on the Nadars, traditionally known as Shanars, they were found principally in the two districts of Tirunelveli and Kanyakumari in Tamil Nadu. Palmyra-climbing and toddy-tapping were their traditional occupations. Treated as untouchables, they were forbidden entry into temples, denied access to public places like roads, markets, law courts and schools.

They could neither carry umbrellas nor live in multi-storeyed houses. Worst of all, Nadar women had to go about bare-breasted as they were prohibited from covering their upper torso. The upward mobility of the Nadars of South India could only be described as phenomenal. Within a span of two centuries, they rose from near untouchability to a position of social and economic power.