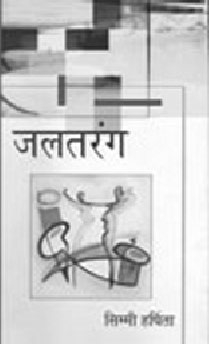 These days I find the prettiest things growing in my garden are weeds. They are the ones I pluck and put in my singlerose vase. They stay fresh for days on end; true (to nature), hardy and beauteous. Shivam, satyam, sundaram: the righteous, the truthful and the beautiful the quintessence of literary aesthetics.

Thereby hangs a tale. Isnt the girl child in our middleclass families just like a weed, growing strong, honest and compassionate with a virile sense of humour despite or because of neglect and numerous attempts at weeding her out Simmi Harshitas welldrafted novel Jaltarang embodies the metaphor of the weed in more ways than one.

First, of course, because it is a searing but humourously told tale of a tough, resolute girl child, who despite all odds, physical and social, grows up to be her own person, choosing to remain single to boot.

The second reason comes out of the spurt in Hindi novels in the last couple of years, making a leading publishing house declare 2010 as the year of the novel. We are by now used to special years. The year of the girl child, the year of woman, the year of the handicapped, of the tiger, of war against AIDS and so on. In the field of literature, it is usually the centenary year of a stalwart, which is celebrated as a special year in his name, for the benefit of the elite. A year of the novel is a refreshingly new thought. It is gratifying that the novel has finally arrived as the main genre of writing or at least there is a movement afoot for establishing it as the main genre. The trouble with movements is that while some novels get discussed ad infinitum, other more significant ones get relegated to the background. Simmi Harshitas Jaltarang is one such novel. Hence the second reason for picking it as the most beauteous, hardy and true, from the large number of novels on my desk.