Mapping the Trajectory of the Greatest Hindi Stories 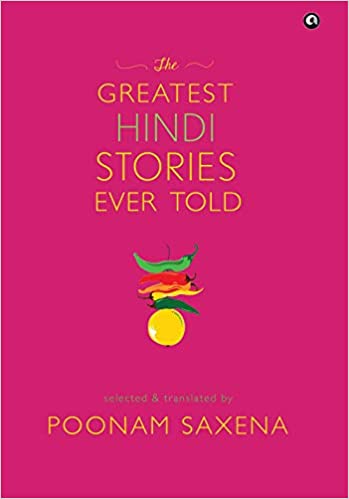 A real translation is transparent; it does not cover the original, does not block its light, but allows the pure language, as though reinforced by its own medium, to shine upon the original all the more fully. (Benjamin, The Task of  The Translator 162)

Distinguished writer, editor, memoirist, and translator, Poonam Saxena, wears many hats with élan. Besides launching Hindustan Times’s Sunday magazine, Brunch, her distinguished writing career includes: translations of Hindi novels such as Dharamvir Bharati’s Gunahon Ka Devta and Rahi Masoom Raza’s Scene 75 into English; a memoir of the filmmaker Karan Johar titled An Unsuitable Boy, which she has co-authored with him. In her latest book, The Greatest Hindi Stories Ever Told (2020), she has curated and translated twenty-five stories, representing a line-up of very formidable and well-known names across different time epochs in the Hindi fiction writing ranging from the early literary masters of the form such as Premchand, Chandradhar Sharma Guleri, Bhisham Sahni, Harishankar Parsai, Mannu Bhandari, and Shivani to the contemporary greats such as Asghar Wajahat, Uday Prakash, Sara Rai, among many others. In that sense, it is both a rather standard anthology, sampling a broad tradition for ‘representative’ texts, and an ambitious project that, as Poonam Saxena describes, demanded first locating and then reading hundreds of stories that have been written and published in Hindi journals (Saraswati, Madhuri and Hans) or books by many Indian writers across many decades.