Homeland of a Stateless Community? 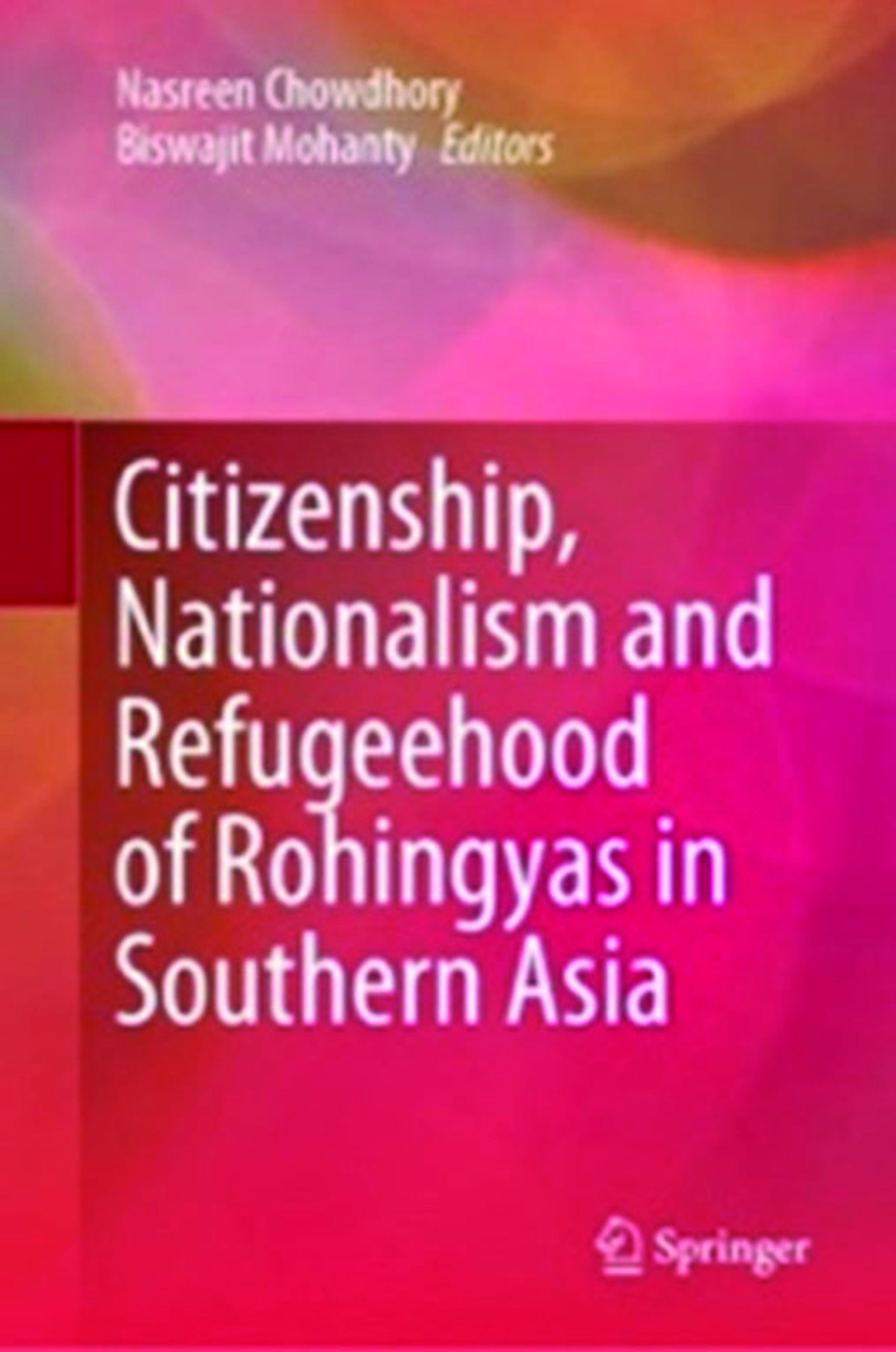 Homeland of a Stateless Community?
Nazima Parveen
CITIZENSHIP, NATIONALISM AND REFUGEEHOOD OF ROHINGYAS IN SOUTHERN ASIA by Nasreen Chowdhory and Biswajit Mohanty Springer, Singapore, 2021, 2021, 249 pp., $64.99
Free Review of the Week

This book is an important academic intervention. It unpacks the political complexities associated with the much debatable refugee status of Rohingya community in South Asia. The vast empirical data/information is systematically organized to evolve an innovating theoretical framework. As a result, one finds an interesting sequence that links different individual essays to produce a highly engaging intellectual commentary on complex ideas such as nationalism and citizenship.

Chowdhory and Mohanty’s introductory chapter pays close attention to the idea of statelessness. They underline the strengths and limitations of various theoretical explanations to rework on a revised formulation. The question of stateless, in this sense, is explored through a revised framework of citizenship and rights. They strongly argue that protecting the rights of the citizen is ‘constitutional and the moral obligation of the political communities: of the state, individuals and civil society’ (p. 4).  In this context, non-citizens are understood as ‘the ramification and product of state borders and attempts to make claims on the basis of de-territorialized identities’ (p. 16).

This innovative vantage point helps the authors to retell a different story of the Rohingya community. The book revisits the legal-constitutional story of Burma/Myanmar and its various manifestations in the post-1948 period. Most importantly, the delicate legal status of Rohingya communities is underlined to point out their systematic legal exclusion.

It is argued that the Union Citizenship Act, 1948 recognizes the Arakanese, one among the other indigenous races of Burma, namely Burmese, Chin, Kachin, Karen, Kaya, Mon or Shan residing before 1823 AD. However, when the Citizenship Act is studied in relation to the Universal Citizenship Act of Burma, things become more complicated. The authors show that the Rohingyas were not citizens at the very outset of postcolonial nation-building process in Burma primarily because the insertion of the term Arakanese need not mean that it includes the Rohingyas. Moreover, the name ‘Rohingya’ has not been addressed anywhere in the text. It is argued that ‘the Rohingyas were not stateless as they possessed citizenship card issued by the Myanmarese government following the Citizenship Act provisions. They were allowed to contest elections until the military coup overthrew the civilian government in 1962’ (p. 19). The later legal-constitutional and political developments in Myanmar further complicated the citizenship status of Rohingyas.

The changing political-economy of this crisis is another crucial aspect that this volume underlines. It is worth noting that a new wave of globalization began in the early 1990s in South Asia. There was a major policy change in Myanmar as well. The economy was partially liberalized. The introduction of private players and global capital had a very negative impact on the internal configurations of ethnic relations. This resulted in the signing of agreements between the government and the armed rebel groups. The aim was to exploit the abundant natural resources falling in the rebel areas. The book shows that companies affiliated to the Tatmadaw could generate significant wealth from many locations. The rioting and burning of Rohingya villages in 2012 and subsequent attacks in 2015, it suggested, could have to do with the capture of land in this area. Government documents also reveal that 17,000 acres of rural land was allocated in the national list for what they call ‘economic development’. The book shows that Rohingyas were actually expelled from the area to facilitate the international economic players, including the big Chinese firms.

The book is organized around three broad themes: (a) unmaking of Citizenship and Systematic Exclusion of Rohingyas; (b) self-perceptions of Rohingyas as a Community and the Complexities of Everyday Life in Different Socio-economic Contexts; (c) representation and the Media Discourse.

Meghna Kajla, Nasreen Chowdhory and Nergis Canefe’s chapters address the first thematic concern of the book. These essays look at the processes by which Rohingyas eventually become stateless. Kajla and Chowdhory interrogate the citizenship discourse of Rohingyas and what constitutes the narrative of marginalization in Burmese society. Nergis Canefe’s essay, on the other hand, illustrates the ways in which the observed pattern of violence has been consistent with the practices of state-induced oppression against Rohingyas. Canefe unpacks the term ‘lawfare’ to show how laws and policies have transformed Rohingyas into the largest stateless population in the region.

The idea of collective self-perception is explored in a number of different ways in this volume.  Shamna Thacham Poyil’s essay strongly argues for a need to have a bottom-up approach to make sense of the notion of nationalism among Rohingya refugees. Kaveri’s chapter examines the everyday lives of Rohingyas living in Delhi, Mewat and Jammu. This chapter offers us rich ethnographies and meanings that are very different from the dominant discourse. A brilliant essay by Sucharita Sengupta further explores this theme. Focusing on the experiences of Rohingyas in the camps of Bangladesh, Sengupta explores their survival strategies, economic engagements and the transformed identities. Meherun Ahmed, Syeda Nafisa Nawal, Ugyen Samdrup Lhamo and Nhung Tuyet Bui introduce us to a very different idea of assimilation. They show how Rohingya refugees have assimilated in local Bangladeshi communities. On the basis of sample survey, they argue that most of their respondents, who arrived in Bangladesh as children or adolescents, have now been absorbed into the informal labour market. Shahana Afrose Chowdhury and Ayesha Tasnim Mostafa look at the social impact of Rohingya crisis especially on children and women.

Biswajit Mohanty’s fascinating essay on the media representation is very crucial to understand the nature of popular discourse on this issue. Mohanty studies the role played by Republic TV in India and the way in which Rohingyas are demonized in popular discourse. He further explores this broad finding in relation to the debates on public sphere. Ritambhara Malaviya’s essay seems to offer a very similar argument. Malaviya finds two types of reporting in India on Rohingyas: war/victory-oriented journalism and the alternative peace-oriented approach. She argues that war journalism draws upon concepts which are masculinist; softer peace journalism resembles the approach of feminists towards conflicts and cooperation. Mafia Mukta’s chapter explores a different dimension of the media: the community radio—Naf, that is based in Teknaf, with technical support from DW Akademie, Germany. Mukta argues that the radio show Voice of Palong gives voice not only to Rohingyas but also gives space to various international humanitarian organizations which are in dire need to disseminate their own messages in the camp settlement.

Chowdhory and Mohanty’s concluding chapter critically engages with the idea of repatriation as a way forward. They strongly argue that the asylum states appear reluctant to institutionalize the role in terms of formal charters of rights. Hence, refugees are supposed to be encouraged to return to their country of origin. The asylum state, it is asserted, acts as a protector, if need be, but such a gesture does not grant formal rights to the refugees. They argue that from the vantage point of the country of asylum, repatriation represents the end of the refugee cycle which is a rather difficult method as a way forward.

This remarkable volume, in my view, introduces us to an unexplored dimension of what I call the idea of homeland in South Asia (Parveen 2020). The conflict between the actual statelessness of Rohingyas and their imagined homeland in Myanmar actually undermines a very peculiar form of belongingness. In this case, the imagined homeland is not entirely ‘legal’—yet it constitutes the foundation on which a political argument in favour of citizenship is made. The discourse of homeland that emerged powerfully during the twentieth century with the modern notion of nation-state has produced a very complex configuration of identities in South Asia. The most significant aspect of this notion of homeland is determined by the relationship a community—imagined or real—establishes with space/territoriality. The debate on citizenship in South Asia is actually a struggle to unfold this discursive relationship. The case of the Rohingya community, which has been denied of its ‘legal’ right to be  citizens by the Myanmar state, therefore, should be seen as a contestation of different ideas of homeland.