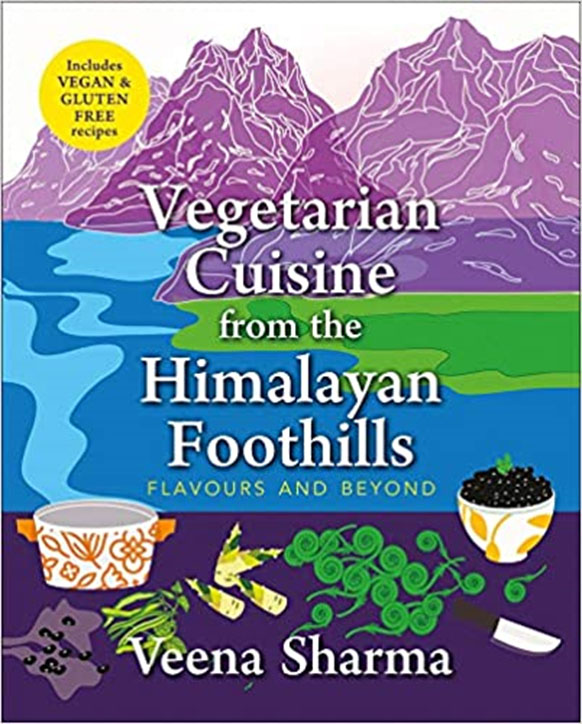 When I think of foods I’m likely to encounter in the Himalayan areas, I think of momos, thukpa, yak cheese. But wait. All these dishes are of Tibetan origin. With that comes the realization that I, and most of us, have little idea as to what is consumed in an Indian home located in the foothills of the grand mountains on a regulaar day. That makes Veena Sharma’s book a crucial addition to the category of Indian food literature.

From Jammu, the Himalayan foothills pass through the Kangra Valley and extend through Sirmaur district to Dehradun and go on to touch the Garhwal and Kumaon regions. Out of this vast expanse of land, boasting a diverse range of local produce and food habits, the author has focused on the cuisine of the Garhwal region. Though simple and earthy in presentation, Garhwali cuisine, says Sharma, provides nourishment to the body, mind and soul.

The book would be incomplete without Sharma’s personal musings on Garhwal and her memories of food that set up the journey the reader is about to embark on. Based in Rishikesh, she weaves a romantic tale about the sun, the wind, the land and how it nurtures the produce grown in the region and, ultimately, the people.

To the author, the food we consume is sacred. She approaches it almost reverentially, upholding the teachings of Ayurveda—studying how it impacts our well-being and contributes to holistic living.

While meat usually occupies pride of place in any Garhwali menu, Sharma introduces us to the region’s vegetarian food. Through this book, I undertook a vegetarian adventure, encountering unknown produce, local grains, lentils, nuts, herbs and seeds. Most of these are little known or completely unknown to those in the Indian plains. Kulath (gehet dal), Himalayan tor (similar to the arhar or toor dal, but not quite), pahadi urad dal, riyaans dal (a small kidney bean like legume made up of a rainbow of colours) and harsil ke rajma are among some of the lesser-known lentils grown and consumed in the region.

Apart from the traditional rice and wheat, Garhwal is also home to large variety of millets—bajra (pearl millet), jhangora (barnyard millet), kadra or mandua (kodo millet), which, says Sharma, pack in three to five times the nutrition rice and wheat have. These, she adds, blend well with other flours and can be used to make rotis, paranthas or puris, but also can be baked into biscuits, cookies, breads, cakes and muffins. Her recipe for biscuits that combines mandua, jowar and bajra, bound by a mixture of ground flax and chia seeds instead of eggs, was a revelation.

Seeds and herbs like til (sesame), jakhiya (dog mustard), chora (which looks like a liquorice stick) and faran (also known as jimbu) are used as much for their medicinal properties as they are for flavouring. Fresh green leafy vegetables like amaranth, bathua, mustard spinach, methi and greens from radish, beetroot, and turnip, are some of the other common seasonal vegetables available in the area.

Looking at most recipes, it is striking how simple the food here is—minimal use of spices, basic tempering—and how it focuses on enhancing the flavour and nutrition of the ingredients rather than masking it. And while I, as a vegetarian, believe that using a light hand with spices and aromatics is the appropriate way to treat vegetables and legumes, the almost negligible use of onions and garlic will seem like sacrilege to our Punjabi brethren who measure these condiments in heart, not in spoons.

The jakhiya seed emerges as a star ingredient in most of Sharma’s recipes. It replaces the cumin seed tempering that North Indians are so familiar with and the mustard seed one in Southern States. In some of the dishes, such as ‘Green Peas with Cream’ and ‘Tomatoes with Himalayan paste’, Sharma even combines the three popular seeds for optimum flavour—a cultural collaboration, if you will.

The author’s aim with the book, apart from popularizing Garhwali cuisine, also seems to be to assimilate some of the pahadi ingredients into the mainstream food culture of India. For instance, ‘Chinsoo’ made with Pahari urad dal is a lighter and healthier version of the rich dal makhani.

The writer endorses a healthy and balanced use of fats in her cooking. In some dishes she simply mentions, ‘oil’ in the ingredient list, leaving the choice of which one up to the reader, but in some others, she recommends specific oils to enhance the flavour of that particular dish. For ‘Himalayan Spinach with Drumsticks’, she recommends sunflower oil; for ‘Sweet and Tangy Pumpkin’, mustard oil; for ‘Green Peas with Cream’, peanut oil; and for ‘Himalayan Bitter Gourd’, organic coconut oil. There is also pure ghee thrown in the mix—recommended for ‘Tomatoes with Himalayan Potatoes’, for instance.

There are several dishes that don’t require me to go urban foraging for ingredients and I can easily source them from my local grocer and these I mean to try my hand at soon—for example, ‘zucchini and sweet potatoes’, in which the zucchini is tossed in mustard and poppy seeds and caramelized in the vegetable’s own juices. Another one is ‘plantain and sago cutlets’ which seems like it would make my heart not just happy, but also healthy. These can easily be served as snacks as well as a side dish. Another dish that I plan to try is the Methi aur Bajre ki Kadhi, which doesn’t require any besan.

Sharma also introduces her readers to the chutneys and preserves—‘Amla aur Sev ki Chutney’ and ‘Bhaang Chutney’—of Garhwal that can zing up any meal. I doubt I would chance upon these at even local Garhwali eateries. I might have to find a way to snag an invitation to a Garhwali home to taste these creations.

The book runs through some raitas and soups, but offers nothing exciting in those sections. The dessert section, too, is mostly composed of run-of-the-mill recipes, except for the oddly named ‘Almost Malpua’. It comes in two variants—one is made using rice and urad dal and the other with semolina and mandua, flour and wheat flour. Definitely worth a try.

As I finished this literary gastronomic journey, the call I felt for the mountains and to experience the real gustatory one was strong.

Anjula Ray Chaudhury, a former government servant, loves cooking and reading about it.