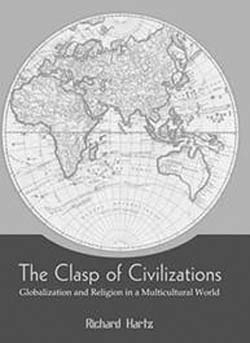 Cultural Contact and Global Mashups
Peter Heehs
THE CLASP OF CIVILIZATIONS: GLOBALIZATION AND RELIGION IN A MULTICULTURAL WORLD by Richard Hartz D.K. Printworld, New Delhi, 2015, 270 pp., 750
May 2015, volume 39, No 5

Globalization: the word is hardly fifty years old but the process has been going on for a very long time. Scholars generally trace its origins to the early seventeenth century, but it is possible to go back much further. The prehistoric migrations that took homo sapiens from Africa to Eurasia to the Americas were the first waves of globalization, setting the scene for all that followed.
When sedentary civilizations were established they came in contact with one another through aggression, trade and cultural diffusion. These three motives—politicomilitary, economic, and cultural—remain the driving forces of globalization today.