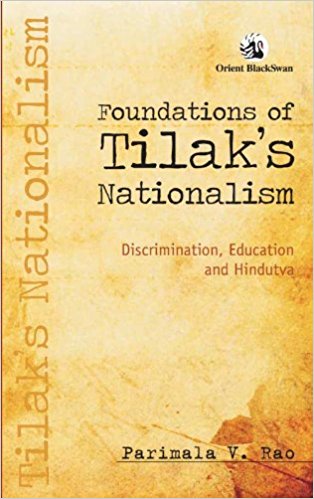 The current academic scholarship over the idea of nationalism represents a dynamic shift from the modernist ideals and framework. The idea of nationalism is critically analysed by posing certain essential postmodern question, which earlier had a little discursive capacity. Parimala V. Raos work on Tilaks nationalism supplements this methodology. It has effectively demonstrated that the rise of the extremist brand of nationalism was not only hegemonic but also insensitive towards women, communally charged and rabidly discriminative towards the struggles meant to bring progressive social changes. This book encounters the blind passion under which any form of freedom struggle against colonialism is cherished without really understanding the intricacies and impacts that it has brought to the society. The persona of Bal Gangadhar Tilak is also created under such nationalist hysteria without going into detailed analysis of his thoughts and actions. Rao argues that Tilaks brand of nationalism has defended the most conservative and orthodox elements of brahmanical society and is detrimental to most of the pregnant social movements (especially Gender and antiCaste movements).

Tilak is valued as a great leader for his direct and radical approach against colonial rule. He articulated the extremist vocabulary on nationalism against the moderates (Gokhale and Ranade) and sowed the seeds of mass mobilization based on communal identity. He located social reforms as unjustifiable intervention of the colonial state in the religious order. He considered political activism to gain independence as a primary duty over the futile exercise of the reformers to condemn their own cultural traditions and values. Tilaks political thought thus represents a deliberate reaction to the agenda of social reforms in order to build a sentimental nationalist uproar against the colonial rule in India. Raos work consciously captures the negative aspects of Tilaks political understanding to show him as an orthodox brahmin leader under the garb of nationalist rhetoric.