Bengaluru, The Chaos That Is 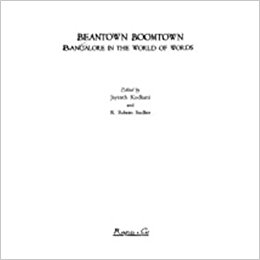 Perhaps no other contemporary Indian metro makes complete strangers of its natives as does Bengaluru. Ceaselessly changing one way systems, the sudden yawning gap in the ground where a familiar landmark stood, ever narrowing footpaths, a babel of tongues and a forest of signs make the place unfamiliar. (My latest encounter was with the advertisement for Rs. 1100 Korean lunch boxes, in Korean, at the Bangalore Ham Shop). Even the stern cosmopolite yearns for the stable years before the 1970s, when Population, Progress and Development began wrenching the city out of its complacence, and turned it into the verb it has become. Verb it is, since the wrenching continues apace, and ‘to be Bangalored’ no longer refers to the pink slip on an American software professional’s desk as much as being disoriented by this permanently heaving monster that the city has become. Not content with the shining economic miracle that it represents, not at home in the richly globalized space that the city offers, the native and immigrant alike search for historical depth, wholeness and narrative meaning in this space that is ruled by the functional uses of space, economic uses of time, and unrestrained, apolitical consumption. A photographer searches in vain for signs of ‘art and culture in Bengaluru’s public spaces’. A bureaucrat laments the sad lack of monuments and cultures that date beyond the 20th century. A writer searches for the signs of a time before the lanyard tagged youngsters became the all too familiar citizen-subject of this city.

In such a desperately contemporary city, it is no wonder that even the 1970s and 1980s are given depth and meaning. There is a clinging to any black and white photograph, no matter how banal, as a ticket to a time that was. There is a matching appetite, as in the airport bookstores, for the quick ‘in’ on the history of the city. Thus, as the title of this book suggests, if one has to put the ‘beantown’ (a reference to the apocryphal story of the 12th century Vira Ballala II’s gratitude for a handful of legumes) back into the ‘boomtown’,