A Narrative of Socialism and Satire 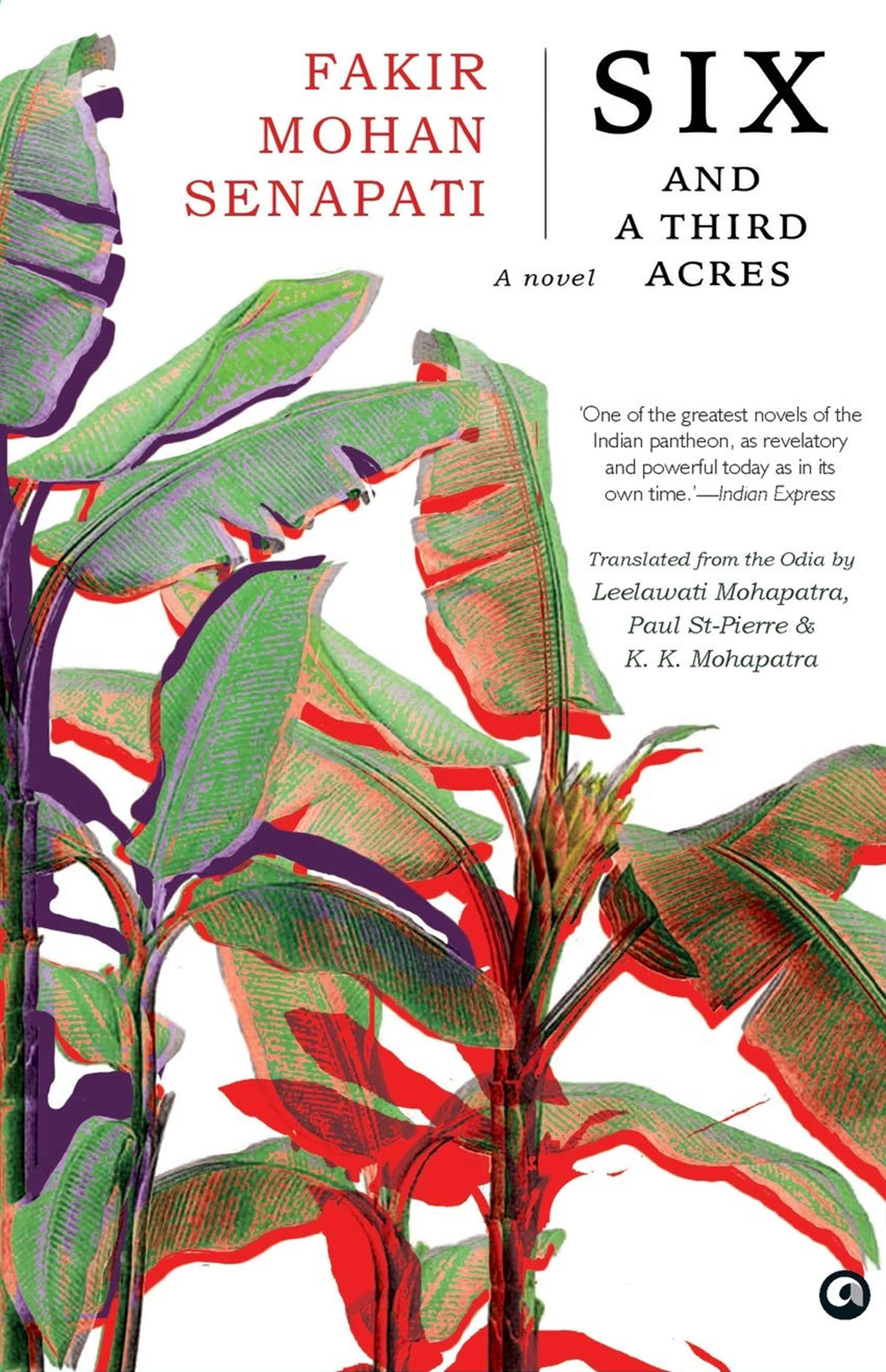 A greedy landlord named Ramachandra Mangaraj, belonging to a coastal village in Odisha, sets out to defraud an innocent weaver couple of their fertile and good-sized parcel of land measuring six acres and thirty-two decimals. He weaves a crooked scheme for this purpose with the help of his maid-cum-mistress Champa and the village barber Jaga. He succeeds in gaining possession of their land, destroying them in the process. But then his karma catches up with him in a bizarre display of peripeteia.

This is the bare and slender plot of Chha Mana Atha Guntha, the iconic first novel by Fakir Mohan Senapati, serialized in 1897-99 under the pen name of ‘Dhurjati’ and published as a book in 1902. Around its ‘economic telling’ (Anjaria 4796) Senapati has spun an elaborate and intricate narrative delivered by an extremely resourceful but supremely unreliable ‘trickster-like’ (Mohanty 19) narrator, taking a swipe at all forms of shibboleths. The other crucial innovation is that the novel featured a villain as its hero, which was another first for the newly evolving Odia novel. Chha Mana Atha Guntha thus emerged as the first modern novel in Odia. A dizzying array of other descriptions has since been wheeled into place: a masterpiece of social realism and satire, a foundational novel in Indian literary history, a signature novel, a Bakhtinian novel, an anti-colonial novel, a postcolonial novel, a postmodernist novel and so on.

Products of successive acts of interpretation and translation, these epithets would seem to mark an increasing distance from the extraordinarily simple framing of the novel for its original readers. The brief prefatory note that the publisher attached to the first edition of the novel, published in 1902, acquaints us with the latter. Here it goes in the present reviewer’s translation:

‘That there is a serious dearth of readable and entertaining works of prose in Odia is a slander heard from many. On being questioned to this effect, we who are Odias have hung our heads in shame. The honourable author of Chha Mana Atha Guntha is a famed and seasoned servant of the literature of Utkal. He has both ability and perseverance. And he is a past master in painting nice and delectable scenes in a simple and sweet language. His creation Chha Mana Atha Guntha is a dazzling instance of this. If we have set our hearts on publishing this work, it is with this hope that it would go some way towards filling the void created by the absence of entertaining and readable works of prose in the literature of Utkal’.

On the face of it, it is clear that ‘Bakhtinian’ or ‘postcolonial’ seems pretty outlandish and exotic as a characterization for a work of prose fiction that its first readers saw as ‘readable and entertaining’.

But then this is the inevitable process of critical reception of a work as it travels in time, configured in new ways by changing tastes and knowledge. So we have to see readability and the entertainment value of the novel as something of a broad blank which varying acts of reading, interpretation and translation have filled with new meaning. A lesson of contemporary criticism is significant here: a work of art is many texts.

The present English translation—the sixth one and the latest—is a robust performance for sure, unafraid to approach the original in a spirit of experimentation. Note, for instance, its use of ‘deconstruction’ (p. 26) to cast into bold relief Senapati’s actual ‘deconstructive’ method of narration, in this instance his ‘deconstructive’ treatment of existing literary conventions of portraying female characters in a famous chapter on Champa. It would seem that this translation’s own approach to the novel’s realism and modernity is far from a tame affair. Perhaps the ‘tectonic shift’, mentioned in the Afterword, points in the direction of the brilliantly polyphonic, polyglot texture of Chha Mana Atha Guntha rather than towards something as bland as ‘realistic depiction of life’ (p. 187) which is used to explain it.

There is no doubt that the realistic and satiric discourse is the most pronounced in the novel and may even be thought of as paramount by many readers. This is because it is the main bearer of the novel’s anti-capitalist content, not to mention its no-holds-barred satire against the new English-educated babus of the Indian society of the late nineteenth century. But this is clearly not the only discourse that the author mobilizes in the novel.  As a matter of fact, we shall be doing Senapati’s novel a disservice if we did not see the pervasive realistic register of the novel as coexisting with a mythic and spiritual register, conveying the time-tested and traditional karmic doctrine of Indian philosophy and religion. Best embodied in religious texts like the Ramayana and the Mahabharat and the ancient shastras that Senapati knew intimately, this wisdom is available as folk idioms and sayings that sit cheek by jowl with the colloquialisms and witticisms of every day Odia speech that this novel inimitably mimes. One quick instance from this translation is the coupling of the colloquialism of Mangaraj waking up ‘at first light’ with the ‘brahmamuhurta moment of awakening’ (p. 12) that comes from the shastras, another example of Senapati’s satire.

Another kind of ‘tectonic shift’ is noticeable in the chapter entitled ‘Saantani’ (‘The Lady of the House’ in this translation) in which the novel perceptibly shifts gears. The key passage is this:

Clearly, two rivers had run through Mangaraj’s life: on the outside, a turbulent torrent causing devastating floods, breaching banks and teeming with snakes and crocodiles, the other, of pure sweet liquid, a quieter stream, subterranean like the Falgu, in the recesses of the heart. Maybe only now he realized that the river within had vanished forever (p. 117).

These two images of ‘Charmaswati’ and ‘Falgu’ not only represent the two worlds of matter and spirit that humans inhabit simultaneously; they also suggest that the final direction of meaning in humans is inward, moral and spiritual.

The novel’s portrayal of the new class of ‘mahajan’ in the figure of Ramachandra Mangaraj and the new city-bred man of money in the figure of Ram Ram Lala is as illuminating as its satiric swipes against English education and colonial values are brilliant. But the novel’s invocation of traditional wisdom is equally important. Champa as the flesh and blood, female incarnation of ‘Charmaswati’ is unbeatable. But Saantani as the secure fount of moral wisdom is unforgettable. Her mode of being in the world is the finest illustration of the anti-capitalistic, anti-utilitarian behaviour (Dash & Pattanaik 223, Sawyer 4788) that will save the likes of Bhagia and Saria from being cannibalized by the Mangarajs of the world: ‘And the mistress had this notable trait: … she lacked the power to twist and mangle words, read meanings into them, embroider on them, let alone make them up’ (p. 113).

Whether seen as a novel of crime and justice in its early critical career or as an allegory of decolonization in its later career, the discussion of Chha Mana Atha Guntha has been dominated by the western critical paradigms. In the process we have forgotten that Senapati created in it a fable for his times in which he observed, like Balzac, the new economic man and a social world in transition, but without ceasing to strenuously press for the moral and spiritual truths that can heal the fragmented colonized self and world.

This translation is punctilious and full of panache. It displays, like an earlier English translation by CVN Das (inadvertently made into CVN Rao in the Afterword), an impulse that is ‘proliferative’ (Das ii), but does not, unlike it, go overboard. A parallel creation in lively, idiomatic and contemporary English, the translation is able to convey the tragic-comic flavour of the original.

This reviewer feels that the translation should have been called by its Odia name with a subtitle ‘a parcel of land’ added to it, the way it has been done for Premchand’s classic Godaan. The old native terms of measurement such as ‘bharan’, ‘nauti’, ‘biswa’, ‘kani’ (p. 7), and, even ‘guntha’ (p. 81) have been retained in the translation, giving it a dash of foreignness. In a like manner the Odia title Chha Mana Atha Guntha could or should have been retained. It deserves this as an iconic Odia novel. Doing so would have taken Senapati’s novel another step closer to being restored to its native habitat. More importantly, it would have helped to differentiate it from the one that preceded it, Six Acres and a Third (2005, reprinted 2006), which also, like the present translation, is the work of multiple translators.