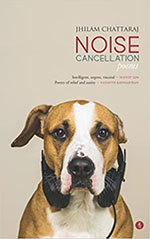 Jhilam Chattaraj is a Hyderabad-based academic and poet. Her debut poetry collection, Noise Cancellation, covers wide-ranging themes, including, but not limited to, food, politics, memory, and the body. In addition, the poet employs, in a versatile manner, disparate styles to explore, sketch, and examine these themes. One finds that the meanings of utterly ordinary objects, places, rituals, and even the body undergo profound transformations within these poems, which later expand in the mind long after one has put down the book; such long-lasting aftertaste could be attributed to the successful amalgamation of the poet’s astute vision, her acute sense of sound, and an aesthetic intuition not ordinarily seen/found in debut collections.

The reader emerges from these poems a little more (morally) aware of the ‘thingness’ (explained subsequently) of objects, places and traditions; and also of the power of language to conceal (and reveal) truths much larger than itself. The poems construct a scene, an argument, an image, from tinier, smaller fragments, which ultimately come together in unexpected ways to become something more than themselves.

For instance, the poem, ‘Ross Island’ (p. 13-14), takes us straight to this far-flung island of the Andaman archipelago, as ‘stitched to the silken sea,’ where ‘sun-washed winds/ post letters from the past’ [emphasis mine]. The discerning reader knows something startling awaits at the end of the poem, when a few lines further, we are made aware of ‘one lonely deer’ breathing ‘…into roots, clutching English ruins:’, which includes, ‘a dancing hall, a bakery, a church’—traces of a once-upon thriving community. As if the sight of ‘English ruins’ weren’t enough, the lines, akin to an archaeologist’s trowel, carve out specific details, thus sharpening our tumble into the island’s history.