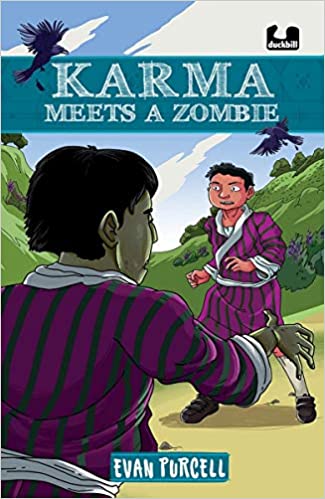 This middle-grade novel on zombies is actually a fun read and is suitable for 8-12 year-olds. It is the second book in a series that stars Karma Tandin, Monster Hunter and is set in a village in Bhutan. Twelve-year-old Karma is ‘not the bravest or the smartest kid’ but has decided that it’s his job to keep his village free of monsters–and there certainly seems to be a lot of them.

A classmate who had been killed by a shark monster (narrated in Book 1) returns as a zombie, one of the undead. The Principal says there is no rule forbidding zombies from coming to school and so Tenzin the zombie becomes an unlikely student at Karma’s school. A bully in his former life, he is now the victim of classmates who decide to torment him because he is ‘different’ from them.  Karma and his best friend Chimmi venture into the house of the local witch to find out how to rid the village of the zombie, but come under a horrendous spell cast by the witch. Eventually, Karma meets the one responsible for raising up hundreds of the undead–and realizes what he is up against.