‘You Have One Book With You’ 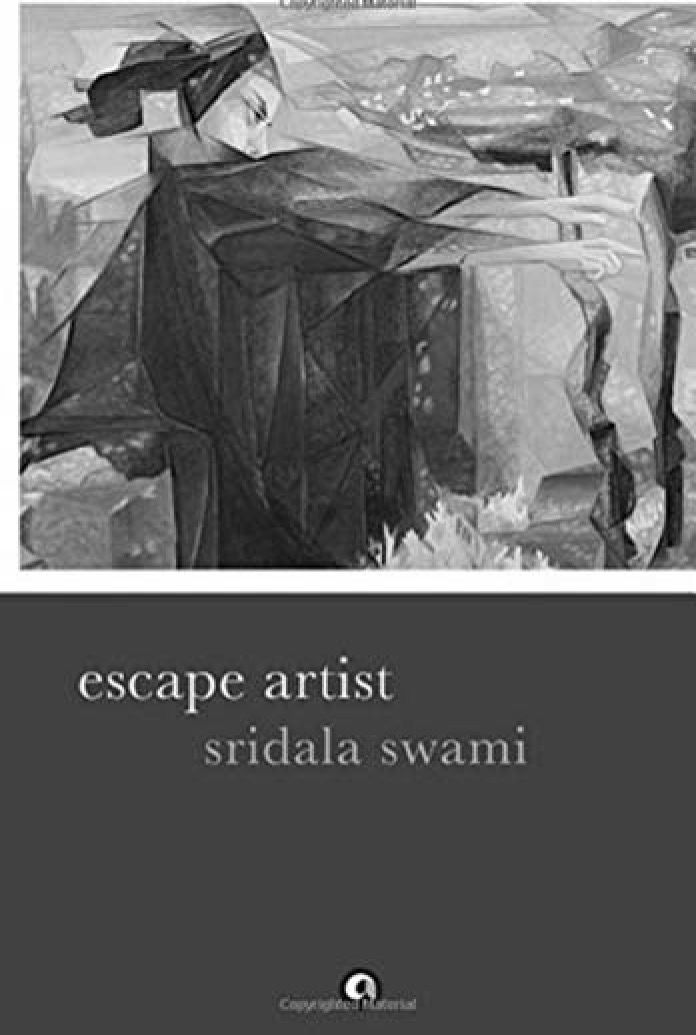 Sridala Swami’s collection Escape Artist is not a sea of several-legged creatures and tangled weeds that confuse an entrant. It has the quiet and spaciousness of an art gallery where each poem focuses on a specific thing, like A sacred text on a grain of rice in her poem ‘Not Loss but Residue’, neatly framed by a larger context, or layers of it. The reader gets time to take in one feeling, one image at a time before they are invited to join the larger connectedness of things. Visually, the lines are placed with care one after the other on a memory game tray, making it easy to remember the various objects displayed.

Before the poet was a poet
everything had a place:

The poet is a product of her past and memories of ancient texts come by in fragments as she tries to make sense of her present.
Mrtyu is a becoming and this shell-
enclosed existence is merely a bardo.
Prepare for life, Garuda.
— ‘Rescue Artist’

Of course, there is no narrow limiting of the landscape to just one city or country. There is also ‘Brueghel’s Canvas’ and a glimpse of Japan ‘in Minidoka, Matsumoto’. Different geographies are evoked.
There is a clear understanding of the politics of gender, which is woven with love and lyricism and therefore, perhaps, reaches its audience more effectively than it would have had it been tackled as a stand-alone issue. In ‘Cryogenic’, Swami plots the perfect Sultana’s dream:
Let’s suppose it is the man who waits
for the woman to return …
nothing acquired, nothing changed
He is just as she had left him…

What can he tell her about truth
or reconciliation?

The overall style is one where readers are invited to take a look at what has been laid out in an apparently detached fashion by the poet. There is a call to the readers to take home what they will after they have seen what needed to be shown. And so when at places there is somewhat of an exception, where the poet’s stance comes through with grit, the starkness is almost electric, like in ‘Clearing the Air’:
After the untimely death
there were priests …

or curses: once pronounced …

‘Be content now.
And live as if nothing had happened.’

When speaking of love, there is a recognition of the shifting hierarchies in relationships, the subtle manipulations, the power plays and, also, the monotony, the jadedness:
Just for once I want all the power. To keep you waiting on
my words
measure my satisfaction in your loss. Just for once …

I want to talk to you and give nothing away.
—‘Not Loss But Residue’

There is a deromanticization of togetherness that coexists with a holding on to the romantic. In ‘The Evidence of Eyes’:
… They ought to look
like each other the way
pets resemble their owners
—but we are
just two people

In terms of form, the placement of prose poetry alongside other poems works well.
The forest is terrifying. I’ve walked here once before and
now you want me along on your journey. I want to say yes.
But I don’t know if I can still be human when I emerge
without you.
—‘Forest’

In some poems, an opening quote by other authors adds to the context and gels with the author’s style of working, with a gentle hand and leaving clues, trusting the readers’ intelligence to find connections and interpretations. The title quote of ‘Ten Eleven’, captures through the eyes of a
photographer the visual of an event that
occurred in real time: ‘There was a huge
explosion. I looked out my window, and
saw what appeared to be pieces of wings, on fire, falling from the sky.’ The poem itself shifts between the mythological figure of Icarus and the actual catastrophic incident of the 9/11 attack. This apparent distancing from reality by bringing it together with something legendary cuts through the shock of violence readers could remember and makes crystal clear a case for compassion
and our own sense of responsibility and accountability, rupturing the passive, linear and outward-facing, incomplete narrative of blame.
… After all, what could be colder
than a world that will not even acknowledge your presence?
A world that holds the water, flat as a mirror, up to you
as you rush towards it in a final fall. Only you shatter
and are destroyed, Icarus. Not even your image.
Once you are under, who can tell broken feather from foam?

There is imagery of nature, people, mythology and objects, expected to be brought alive through the memory of feelings many of us would have experienced or continue to. These lines from ‘The Twinning of Cities’ are one instance:
Electric fences come alive at night
and people claim for their houses
the mongrels that scrounge for scraps
outside the servants’ quarters.
Beware of Dog.

There are poems that flow from remembrances of artists, like of Kiarostami, the filmmaker, and, Richard Drutman, the photographer. Swami appreciates the challenges and nuances of different art forms, of which poetry is but one. In ‘Mise-en-scene’, for example, the poet examines the craft of filmmaking:
The armature of the crane takes its time.
The earth is shifted in very small increments.
We will not see the end of this fashioning.

As a collection, Escape Artist offers a bird’s eye view, an honest, guided tour of the various phases and stages of life, the ones spent with others, and those that must be met alone to be confronted and discarded or to be
caressed in solitude. The book reminds us
of the bargains we make, the compromises we settle for, the guilt we carry and the responsibilities we evade. It becomes a call
to conscious and observed living, one that lets us know of what involves the creation of happiness and warns us against manufactured wellness. These lines in ‘Redacted poetry is a message in a bottle’ seems the poet’s note to self:
You have one book with you. It is your lifeline, because you
are now in a place with no means of communication. There is
only this book, and your one chance of speaking to the world
is through the words in it.

The poems are a testament to the fact that the author has taken these words seriously and has weighed the words she puts in the poems, guarding against superfluity. In order to fully appreciate the concise, bursting-with-meaning messages, the readers have to do their share of the work too: remember their history, deconstruct the symbols, and make the connections. It is likely that the book would encourage its readers to also pick up A Reluctant Survivor, the poet’s first book, and hunt for possible messages for adults camouflaged in her books for children.
But what am I saying? I must not wax eloquent or I will have to answer for it.— (From ‘Perforation’)

Ankita Anand is a Delhi based poet and writer. She writes in Hindi and English.