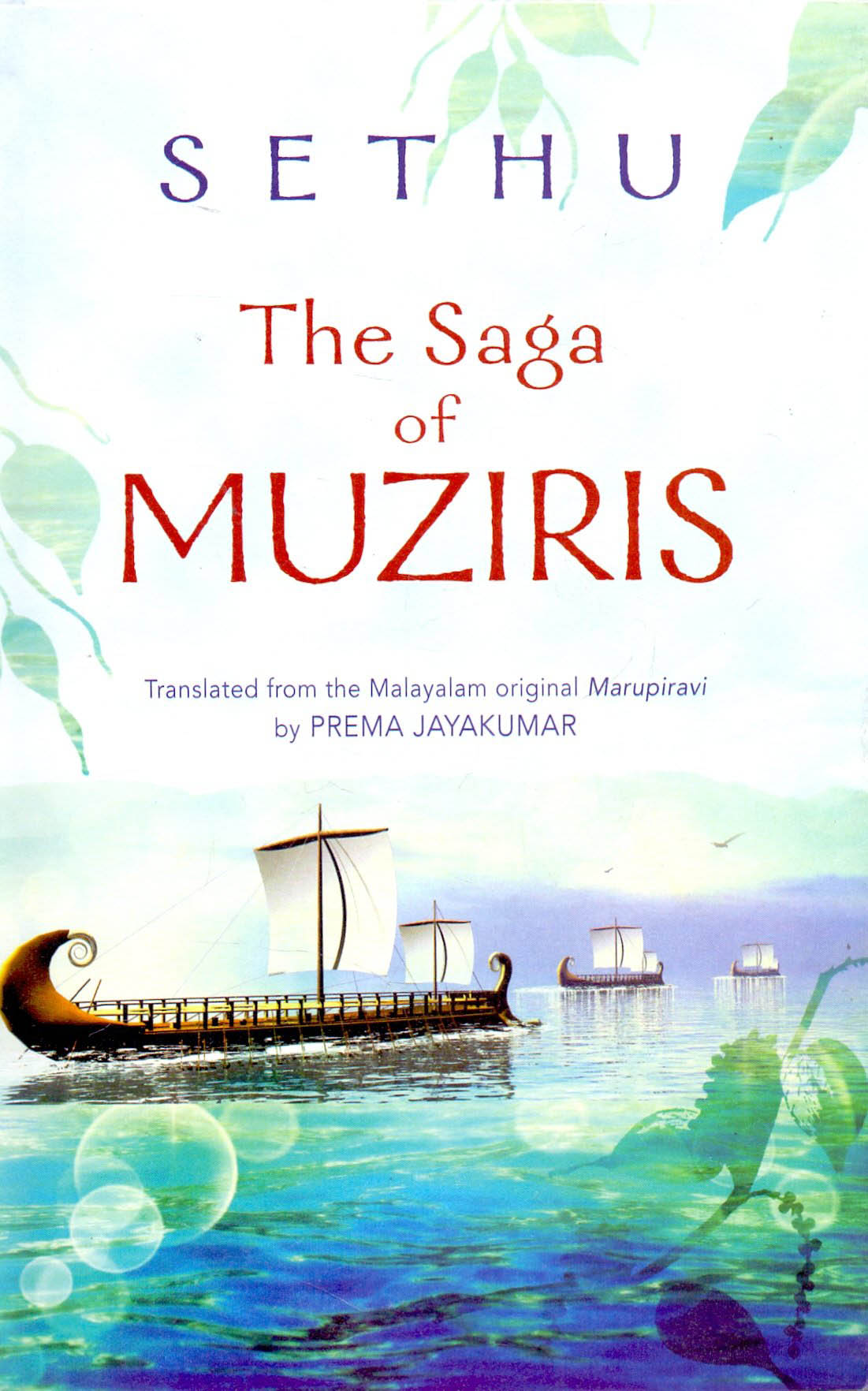 Muziris is the story of generations, Muziris is the story of an Ahalya waiting to come alive, she is a life force lurking to be discovered from behind termite-ridden pages, she housed a civilization to be celebrated, she influenced the financial structure of the world, her shores were dangerous and the Yavana sailors came in to eat, drink and to whore, ponnode vanthu kariyode poka, she held so many sights and sounds. And what happened to Muziris ?

‘Nature had her rules and truths. When the land went against these rules and truths, the sea knew how to take back the land that it had given in its mercy,’ says Kichan. Aravindan the sakshi recorder lets us hear the voices of Perumal, Jaleelikka, Azad who speak of her today, and of the people who inhabited her long ago, Ponnu, Adrian, Thanka, Kichan and of Achumman and Bezalel who speak of a time before today.

What does Aravindan find, is it the place, the story or is it the search itself? And I am reminded of what Cavafy says of Ithaca,

She who gave you the marvellous journey.

Without her you would not have set out.

She has nothing left to give you now.

And if you find her poor, Ithaka won’t have fooled you.

Wise as you will have become, so full of experience

Muziris does not fool us or disappoint us, neither the place, nor the book by Sethu as told by Prema Jayakumar.

Before starting to write the review, I thought I will go through the book once again and note down the numbers of the important pages, and so it will be easy. But I am now looking at the first page with page numbers all over the title and round it and I am flummoxed. How do I choose? So I took a hint from what Bezalel says, ‘It’s good to have some distance between remembering and writing.’ Aravindan the recorder of this tale writes, ‘It was impossible to think of the past of Muchiri without involving the Jewish community’ and introduces Bezalel. You learn about how they came from afar, how they were received, and the ache for their own flag, the journey back to the Promised Land and about those who knew the value of roots , ‘And the rightness of roots.’ Is this Muziris?

The Kottayil Kovilagam was a shining example of amity among religions, and once in eight or nine years the festivals came together and the conch from the temple, the muezzin from the mosque, the bells from the church and the Jews’ shofar would be heard together signifying the communal oneness. Is this Muziris?

A call from Perumal takes Aravindan to his home town, and he had dreamt of his mother too. Another call really. And then Muziris captures Aravindan and he cannot help but write of the wonder that she was, and the people who lived there like Vadakkoth Thanka, Ponnu and Kunkamma, the people who came there like Adrian and Kichan, the Velumban the white one who understands the land and the people. Land is a live thing, a woman, if you please, for Manikkan and Kichan. ‘She came and whispered in my ear. She, the new land’, says Kichan. Manikkan says that when man rejects the soil the thinas will transform and maruthu will become pala. The truth of the soil enters Kichan, is this Muziris?

Thanka trusts Kichan and lets Adrian the Yavana into the Vadakkoth house. The lodestar of the Yavana ships, we are told, pointed only to Muchiri. Adrian is the lover of Thanka and her daughter Ponnu. But Thanka makes sure that the body alone is polluted and the dirt is not allowed to enter. So Chami Vaidyan gives a powerful medicine which forms a protective shield against the Yavana seed. Ponnu revolts against the medicine. Is the purity that Thanka holds sacred, a metaphor for the land, a metaphor for Muziris?

Kunkamma is a tantalizing combination of Thanka and Ponnu. The idea of what to do with Kunkamma is solved for Aravindan by his grand-daughter Gayathri. She runs a business with sharp acumen fulfilling the dream of Thanka and is helped by Kichan Mama. Aravindan forges the link between Muchiri and Kochi by bringing Kichan the ‘plough man of the maruthu lands’ to the city. The scene where Kichan goes back to his black soil is sheer poetry. ‘Velumba nee thirumbi vandittaya.’ ‘Ama Appa, I’m still that boy, I can’t grow up.’ He is fulfilled by the smell of Muchiri. The Woman and The Land are one, they smell alike, they respond to the first touch alike, they open up and flower alike, and they punish when needed.

We do not understand how sacred the soil is, the soil we walk on, the soil which feeds us, Sethu grieves over this and even rages. Azad who has spent a lifetime ‘selling’ Egypt and the pyramids to tourists tells Aravindan, ‘Which river is more sacred than the earth you were born in?’ Had A.E. Azad found something that linked his land Muziris to the world? ‘I offer my greetings to the first man from Muziris, who come in search of me after generations and happen to see this.’ The book is like a Chamber of voices, almost like the Pyramid of poets that was installed in the recent Biennale. Here too you keep hearing voices that link you with a voice from the past, echo-like. Of course not all the Muziris—voices are resonant with grief. I do not know how Sethu captured this sound of echoes in his writing and I marvel equally at the translator’s art. Echoes as you know have only an aural existence.

There are others who are of today but linked with yesterday … echoes again like Josa who sends word when he heard Aravindan had come. Josa wanted to learn Chavittu Natakam from Pailappan Master who was a direct descendant of Pallithara Lona who had actually seen Vasco Da Gama. Josa is told by the girl Selina, daughter of Pailappan Master, that women must have women smell. In the end, Josa decides that painting houses like his father was better for him and forgets the Chavittu dream, lime-wash brushes instead of the sceptre of Karalsman. But he can’t. As one can’t forget Muziris.

Achumman comes to stay with Aravindan to help him while he is ‘awakened by the history of Muziris’. Achumman tells us how marriages were performed then, even the position of the fireplace had to be just so, and how the story of Ayyappa was sung then, and the udukku had to be taken only after a ritual bath and purification. Why were these rules important? Did these rules keep the idea of Muziris afloat?

No, not all rules. Rules like not allowing some people to walk along the streets had to be thrown away. ‘Paths were meant for people to walk through’ The journey to Muziris was a solitary one, through different times, different generations, the Paliyam struggle was a symbol of the changes that must have happened to Muziris and so Aravindan writes of A.K. Gopalan and the Communist Party. And thus the wind blew through Kodungallur Palace and princesses who were bound by chains of old traditions broke free and took part in the Paliyam Satyagraha.

The craft and knowledge of artisans was breathtaking. Thanku Moopan who makes jewels for Thanka would decide the pattern only if he saw the woman who would wear it. ‘The pattern took form not just on the body but in the mind of the woman who was to wear it.’ Wow! Aravindan had a classmate Pushpan whose family wove cloth and this the story of Devayyan takes shape. Devayyan carried a bundle which revealed fine dhotis which felt like something from heaven. Weavers believed weaving was a sacred gift given by the gods. ‘Creation and selling should be kept apart.’ This sentence cuts our cheek like a whiplash and contains within the seven words the tragedy of our lost knowledge and our innovative strengths. Manikkan refuses to grow pepper the black gold, he does not want pearls or gold. ‘Our pearls are these grains.’ A stern turning of the back to Yavana gold and keeping faith with the land. Was this Muziris?

Padmavathi and Ramabadran are privileged to read Aravindan’s first draft. Padmavathi wants to know where this man has been all this while. Ramabadran is choking with emotion. Muziris the book evokes this feeling too, as does Muziris the place.

Professor Appa, Aravindan’s father-in-law is a petty tyrant who draws rule lines which his daughter obeys, son laughs at. Is he a comic relief, or is he an expression of the underlying tension between the people who speak Malayalam and Tamil? He too serves a purpose for the common past, the Sangam poetry, the thinas marking the landscape, speak of a time when barriers were not there. The time of Muziris.

And I wish Keezhadi too calls to the soul of another Aravindan, and a Sethu. And if a Sethu also a Prema Jayakumar.

Prabha Sridevan is a former Judge of the Madras High Court, and a former Chairman of the Intellectual Property Appellate Board. She writes regularly in Tamil and English. Seeing in the Dark: Short Stories by R. Chudamani (OUP 2015) is her first translation.