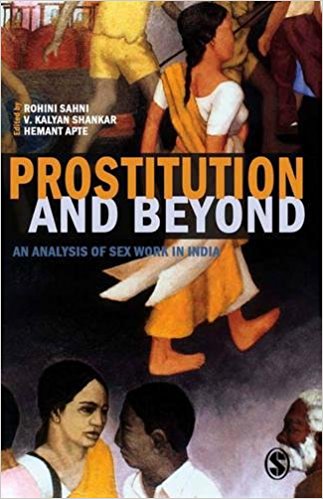 Beyond prostitution is a collection of twenty-three essays on sex work in India. Of these only two essays have been previously published in academic journals. The essays in the collection range from serious analyses of themes in sex work in India, historical and literary surveys of various forms of the practice, brief field based reports, a panel discussion and finally even a journalistic interview with a medical practitioner working in a red light area. A majority of writings stem from experiences and engagements that are situated in the states of Karnataka, Andhra Pradesh and Maharashtra although there are a few pieces from other locations such as West Bengal and Rajasthan. The striking unevenness in the empirical content and analytic quality of the papers in the volume may be attributed to the heterogeneity in the location and background of the contributors. Some very useful and incisive analyses of the mobilization around the issue of sex work in contemporary India thus find a place alongside some very preliminary pieces.

That most, though not all, of the contributors to this volume are activists and NGO workers is a reiteration of the dominant trend in writings on sex work in India.

In one of the most pertinent essays, Swati Ghosh offers an incisive analysis of the ‘Sex workers’ manifesto’ in Section I of this volume. This manifesto is a theme paper that was produced by the women engaged in sex work for the First National Conference of the sex workers held in Kolkata in 1997. This ‘unique politico-moral’ document has acquired some amount of salience in the debates on prostitution in India and therefore Ghosh’s analysis which demonstrates its limited critical and political scope is extremely valuable. She argues that this document does not proceed beyond the framework which critiques social marginalization of women. It also glosses over how sex work is implicated in the class dynamics of the wider society and the extremely exploitative organization of the sex industry itself. Ghosh traces the reticence to address these issues to the liberal feminist stance of this perspective which does not go beyond seeking a more egalitarian position for sex workers within the existing social order.