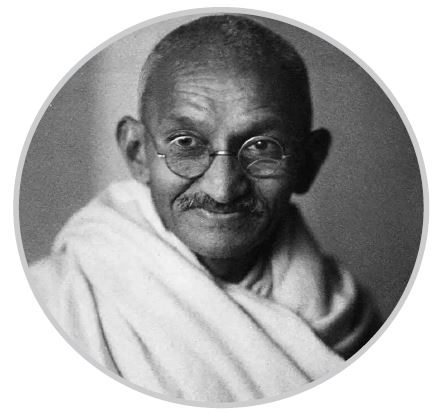 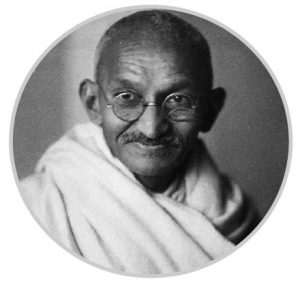 The Indomitable Mahatma
By Syed Areesh Ahmad
“In a gentle way we can shake the world.”

At the stroke of the midnight hour, on 15th August, 1947, when India was rejoicing in its newly-found Independence and Nehru was ushering in this historic moment in Delhi with his famous ‘Tryst with Destiny’ speech in the Parliament, Mahatma Gandhi—the greatest architect of India’s freedom—was in Calcutta fasting and praying, perhaps filled with self-doubt that his life-long teachings of Ahimsa were being consumed by the flames of a diabolical violence that had engulfed the subcontinent. According to estimates, more than one million people perished in the killings and more than 10 million people across the subcontinent were uprooted from their homes and forced to travel across the borders in the single largest migration documented in human history.

These were dark times; times of despondency and hopelessness. Leaders across the political spectrum were shocked by the unimaginable scale of blood-letting; it was as though a monster had been unleashed and was devouring the very soul of India. Gandhi’s greatest test—it can be argued, with the benefit of hindsight now—came at the very fag-end of his life, in this moment of monumental crisis when his beloved country was trapped in what must have seemed to be, at that time in the wake of the Partition in 1947, an interminable cycle of communal pogrom that showed no signs of letting up feeding voraciously as it was on hate and ill-news of mindless rioting, on both sides of the border.

To restore sanity, to break this cycle of vengeful carnage, to pull a whole people, who were dangerously close to the abyss, back to the confines of humanity by stamping out the beasts in their soul was a gargantuan task—an inconceivable task according to the many who were witnessing these horrific events; even armies were helpless in the face of such bestiality that was unfolding every day. Gandhi was a broken man, perhaps filled with self-doubt about his convictions in the principles he stood by all his life; he was frail, close to 78 years; he was alone in atonement as he couldn’t prevent the vivisection of India, nor could he stop the spiralling violence which had now reached Calcutta, literally on his very doorsteps. On 31st August, 1947, a violent mob had surrounded the Hydari Manzil where Gandhi was staying, pelted stones, broke window-panes and shouted angry slogans against the Mahatma.

In his long life, punctuated with struggles against injustices, both in South Africa and later in India, Gandhi had shown a unique capacity to find limitless reservoirs of strength, especially when all seemed lost, and when everyone else gave up. Once again, in the twilight of his life, in a moment when his own countrymen had turned against him, were throwing stones and hurling abuses at him, Gandhi picked up the gauntlet and in the remaining months of his life worked indefatigably, effectively—and as some say, miraculously—for restoring a modicum of normalcy, a semblance of sanity among people. His very own ‘miracle’ was Calcutta. He began fasting on the evening of 1st September, 1947. It was an indefinite ‘fast that would only end if and when sanity returns to Calcutta.’(1)

By the time Gandhi broke his fast in the evening of 4th September, something surreal had happened. The whole city, indeed the whole of Bengal, was moved to tears. Hindus, Muslims and Sikhs who were baying for blood only a few days earlier were now making a beeline to the chambers of the Mahatma, surrendering weapons, atoning for what they had done, promising to lay down their lives for saving their erstwhile enemies. This truly was magical. Indeed, Lord Mountbatten wrote to Gandhi remarking that, ‘In the Punjab we have 55 thousand soldiers and a large-scale rioting on our hands. In Bengal our force consists of one man and there is no rioting.’(2)

How did Gandhi kindle hope in despair? How did he manage to melt hearts? Gandhi had this uncanny ability to renew faith in the power of love. He understood that real transformation only comes from within. He was a practitioner of principles, not an expounder of ideas; his strength lay in experience, not in thought; he could understand the pulse of the ordinary man much better than his contemporaries because he was not bound to a doctrinaire set of beliefs. Above all, he was not scared of being inconsistent.(3)

Also, Gandhi steadfastly believed that there is a distinct separation between humanity and animality.(4) He therefore was convinced that he was demanding no greater sacrifice from human beings than they were capable of; only when the categories of the human and the animal are erroneously conflated, only when the human is understood as a bundle of desires, as a creature of self-interest—as the western civilization did, according to his interpretation—can love and nonviolence be placed in the clouds of idealism, beyond the reach of the ordinary man.

The usual divides somehow evaporated when Gandhi took centre stage. He could easily transcend the dichotomy of ‘us’ and ‘them’ by appealing to the humanity of all. The best instance of this—something that would have surely perplexed hardened analysts of politics—was the love and affection he received from the weavers in Manchester, in Lancashire, when he visited England in 1931 as the sole representative of the Congress to the Second Round Table Conference. The mills of Manchester were shut because of Gandhi’s insistence on Swadeshi. And yet, the crowd of mill-workers, mostly women, thronged to welcome Gandhi and showered him with love and empathy. As the labour historian Dilip Simeon writes in his blog, ‘There are few, if any, examples of a leader of an anti-colonial struggle whom the citizens of the colonial power held in such affection.’(5)

Gandhi routinely managed to turn the hearts of the so-called enemy by offering himself as a sacrifice, by removing the two sides to any dispute and replacing it with the force of his conscience.(6)

A major feature of Gandhi’s politics was his absolute insistence on morality, and the purity of means. While the Indian National Congress had accepted nonviolence or Ahimsa as a matter of political strategy, to Gandhi it had a creedal value. On occasion, Gandhi did not hesitate in going against the Congress itself if the question was to uphold principles which he held dearly. Let me illustrate this by giving two pertinent examples—one from the early days of his life as a leader of the struggle for freedom in India and the other when India had just achieved Independence. Gandhi stood tall, against the advice of everyone in the Congress, and he withdrew the noncooperation movement after the unfortunate incident of violence at Chauri Chaura on 5th February 1922. Even Jawaharlal Nehru shot an angry letter to Gandhi as he failed to fathom why Gandhi would stop the tide when the whole country seemed galvanized for action. But Gandhi was unfazed; he made it abundantly clear that India was not prepared for the kind of movement he wished—one that had to be totally nonviolent. For him no good result could ever be achieved with questionable means.

The other significant example comes close at the heels of Independence. Gandhi defying his own party, his own government, began a fast unto death so that India repaid its due of 55 crores to Pakistan. At that time Pakistan and India were locked in a military struggle over Kashmir, there was a genuine concern that Pakistan would divert the money to its war effort, but Gandhi would have none of it. This shows that Gandhi was not bothered about public opinion once he convinced himself about the correctness of a cause and its moral efficacy. What Gandhi did in those trying times required superhuman courage.

One wonders how Gandhi would respond to the politics of hate that holds the field today in India. What would he say about the Citizenship Amendment Act which is in the eye of the storm, as it were, of massive protests and demonstrations? Would Gandhi approve of a law which is exclusionary, even if for sound reasons? Or, would Gandhi insist on making no distinction between refugees and migrants, no matter what their religion? All his life Gandhi exhorted that India did not belong to Hindus alone, but to everybody. Indian Secularism—as enshrined in the Constitution—draws heavily from the Gandhian understanding and practice of equal respect to all religions, or what is also known as ‘sarva dharma sama bhava’. Would Gandhi allow a sectarian law to be etched on the moral conscience of the country or would he make it his bounden duty—even against the grain of popular opinion—to resist such a law?

1 . Gandhi: The Years that Changed the World, Guha Ramchandra; pp. 846
2 . Mountbatten wrote a letter expressing his gratitude for Gandhi’s efforts at restoring peace in Bengal on 26th August, 1947.
3 . ‘Gandhi before Habermas: The Democratic Consequences of Ahimsa’, Economic and Political Weekly, Vol. 44, No. 10 (Mar. 7 – 13, 2009), pp. 27
4 . ‘The Strange Violence of Satyagraha: Gandhi Itihaas and History’ , Ajay Skaria, pp.164 in Heterotopias, Nationalism and the Possibility of History edited by Manu Bhagwan (2010)
5 . Cited in ‘When Mahatma Gandhi was welcomed by textile mill workers of Lancashire’;The Indian Express, October 2, 2018
6 . https://www.asiavillenews.com/article/gandhis-quest-for-truth-10251