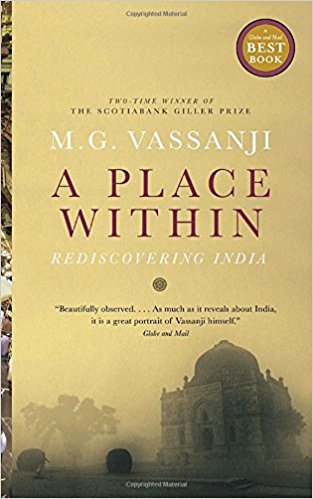 A Place Within: Rediscovering India is a detailed personal account by M.G. Vassanji of a series of visits he made to India, between 1993 and 2007. Born in Tanzania, and now a resident of Canada, M.G. Vassanji received international recognition with the publication of his first novel The Gunny Sack in 1989. This remarkable book reconstructs the history of the East African Asian diaspora in Africa, starting with the arrival of Dhanji Govindji from Junapur (in present day Gujarati) in Zanzibar in 1885, and moving chronologically towards the departure of his great-grandson to the West in the mid 1970s. Several autobiographical elements can be discerned. For example, Vassanji’s own family left India about a century ago to settle in East Africa. While Vassanji uses the fictitious name of the ‘Shamsis’ in his novels, there are clear similarities between this community and the Ismaili Khojas under the Aga Khan.

A typical characteristic of the diasporic subjectivity is a sustained bond with the ancestral homeland over a long period of time. Vassanji visits India for the first time after three generations of his family, in 1993. He is overwhelmed by a sense of homecoming and nostalgia. Although he has never been on Indian soil before, he is ‘hit by an overwhelmingly wretched sense of the familiar’ (p. 41) on arrival at New Delhi airport. He attributes this largely to the legends and tales he has heard as a child from the women in his family. ‘My mother’, he writes, ‘held blithely contradictory views about India. On the one hand it was the land of ruthless cunning and violence … On the other hand, India was the land of primal morality’ (p. ix). Another significant influence was the ‘mythical memory of India’, ‘sustained by the foundling legend of the Gujarati Khojas of a Muslim holy man who arrives in medieval times at a remote village in western Gujarat, and who teaches the villagers to expect an incarnation of the Lord Krishna to come from the West’. It is this syncretism (‘a happy combination of mystical and devotional Hinduism and Islam, without a thought to internal contradictions or to the mainstream traditions’ (p. ix)) that shapes Vassanji’s humanistic outlook. He is therefore immensely disturbed by the ‘barbaric blight’ of communal violence that damaged India’s secular fabric in the 1990s, and he reflects at length on the extent of inherent prejudices that surfaced during the Mumbai riots in 1993, followed by the Gujarat riots in 2002.

A Place Within: Rediscovering India is presented to us in the style of journal entries. Vassanji begins with his initial twenty-eight day tour across the width and breadth of the country. We then learn of his experiences during his subsequent visits to the country as he travels from the southernmost tropical tip in Kanya Kumari, to Dharmashala in the Himalayan foothills. By reflecting on his experiences during these journeys, Vassanji traces how his relationship with the country has gradually evolved over time. He also admits that in spite of his copious notes, the experience ‘was deeply subjective, my India was essentially my own creation, what I put of myself in it’ (p. xii).