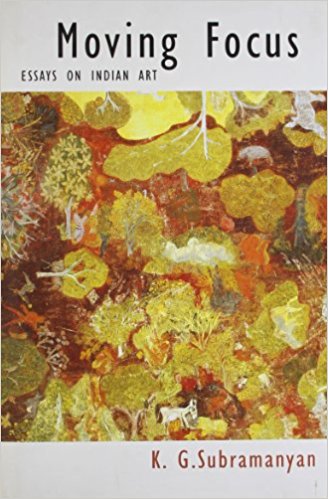 The combination of being an able scholar, critic and artist is rare enough, but to combine this with an influential teaching career is an achievement. At the University of Baroda, Professor K.G. Subramanyam has inspired more than two generations of artists, not only by his own work but by the impact of his critical writings. An effort at compiling together these essays has been made at the behest of several artists who have felt the seminal influence of his thought, and who consider his contribution to the art scene to be profound. Moving Focus published this year by Lalit Kala Akademi is thus actually a reprint of his articles, published earlier in different art journals such as Lalit Kala (Contemporary), Marg, Vrisc­hik, Indian Art Since the Forties (Chola­mandal) and other journals. The essays are concerned with some general ideas on fundamental issues as ‘Art and Change’ (or art and tradition), on ‘Religion and Art’, and more speci­fically, on ‘Modern Indian Art in the last Three Decades’,

‘Indian Art in the Socio-­Cultural Context’ and ‘The Struggle for Image in Contemporary Art’. Apart from these there are a few critical evaluations of the life and work of some major artists, at the formative period of Indian art in this century.