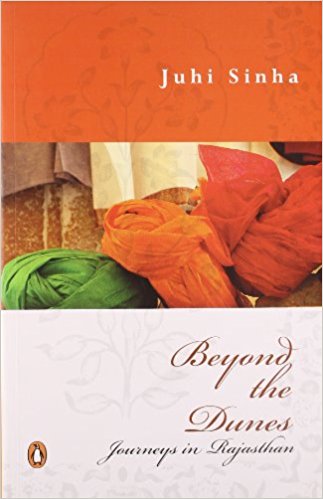 There are many kinds of travelers in this world. On one end of the spectrum, you have the “been-there-done-that” variety. Every place they visit connote just another ‘conquest’ and memorabilia they bring back (not to forget the footage on that indispensible handycam), ‘trophies’ to show off. And then you have the type that are mentally so scared to venture out of their environment, that they pack it all up – kitchen, cook, spices et al and tug them along. A few in this world who thirst for adventure and possess a true desire to learn don a backpack with bare essentials, a free spirit and set out. So when one picks up a travelogue cum personal memoir called “Beyond the Dunes – Journeys in Rajasthan” written by veteran documentary and television film maker Juhi Sinha, one expects to read about paths less taken in this desert state touted as the ultimate tourist destination in India. But on many counts, this book falls short of such expectations.

The book predominantly describes the author’s journeys into Rajasthan on various professional shoots as a film and serial maker interspersed with anecdotes that marked her holidays to this state over the years. After a brief introduction where she talks of her early initiation into travelling, on weekend trips to neighbouring destinations from Delhi and her first brush with Rajasthan as a kid, Sinha goes on to recount the days spent in Bharatpur, shooting at the Keoladeo National Park. If this chapter sets a decent pace to the book, the following one describing her brief, non-eventful holiday to Alwar and neighbouring Sariska and Kesroli Hill Fort takes the wind out of it. A good part of the book is devoted to describing the famed Heritage Hotels, forts and palaces that make this state so popular with tourists. A quick throw-back to the past about the history of Heritage Hotels and interesting trivia are provided about each of them – Castle Mandawa, Narain Niwas, Samode Palace, Neemrana Fort and the Palace Hotel at Mount Abu, which all figure in her documentary film “The Shifting Sands” aired by Doordarshan. The author weaves her bitter-sweet experiences while shooting at these locations for various serials and films produced by her with tidbits from history, glimpses of what her profession entails and an occasional portrait of people she comes across. Her trip to Jodhpur on recce, where she comes across the legendary folk singers of western Rajasthan, the Langas, at the hotel she is put up leads to a full-fledged project starring renowned Langa singer Nek Mohammed and his troupe. The book wraps up with a series of her holiday experiences in Pushkar, Deogarh, Kumbalgarh, Nathdwara, Chittaurgarh and Bijaipur and her last shoot in Rajasthan promoting Jhalawar as a tourism destination.

While the nature of the author’s profession lends ample scope to the treatment of a common, oft-written about subject such as Rajasthan and tourism in a refreshingly uncommon way, it is unfortunate that she ends up portraying the state in its conventional images of the desert, palaces, forts, hotels and temples. This reinforcing of stereotypes rather than exploring the true depth of this state presents itself as one the major failings of this book.