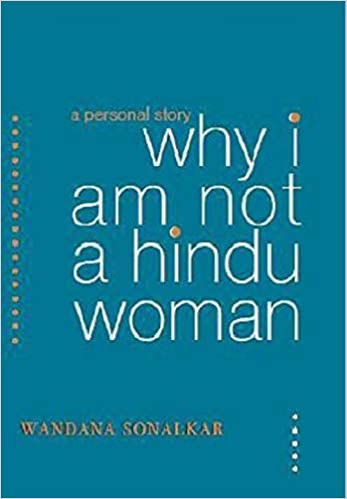 Autobiographical Reflections
Preeti Gulati
WHY I AM NOT A HINDU WOMAN: A PERSONAL STORY by Wandana Sonalkar Women Unlimited Press, Delhi, 2021, 169 pp., 350.00
Free Review of the Week

Why I am not a Hindu Woman is Wandana Sonalkar’s autobiographical reflections on Hinduism as a religion, as an upper-caste Marxist feminist, and in the context of India’s socio-political journey in the last seventy three years, particularly in the shadow of Hindutva majoritarian politics. Sonalkar uses her life and experiences as an entry point to the wider social and political climate of the time, moving fluidly from normative texts composed c. 300 CE to India’s early years as an independent republic, while also bringing into the narrative recent public movements from Bhima-Koregaon to the pan-India anti-CAA/NRC protests. Across this vast time span, Sonalkar makes a compelling case for rupturing the private and political divide, by tracing the roots of the political philosophy of Hindutva in the Hindu normative ideals of family and household.

Historiographically, Sonalkar locates herself amid a series of books written mostly by men on their own relationship. Notably, these include Kancha Ilaiah’s path-breaking Dalit Bahujan Critique of Hinduism (1996), Shashi Tharoor’s attempt at reclaiming a more pluralistic, tolerant Hinduism (2018), the Marathi film director Atul Pethe’s similar attempts at showing how his Hinduism is not violent (September 2018), Bertrand Russell’s (1927) and Ibn Farraq’s (1995) monumental pieces on their disassociation with Christianity and Islam respectively.The exception in Sonalkar’s outline of her field is Ruth Vanita’s critique of the Left in India (2002), which, by disassociating from Hinduism, also failed to mount a critique of casteism, both in idea and practice (p.18). Against these, Wandana Sonalkar sets herself apart by writing from the point of experience as a woman in a Hindu family. Why I am not a Hindu Woman is thus a feminist critique of the inequalities inherent in ‘“every day, lived Hinduism’ (p. 24).

Sonalkar lays out this feminist critique by tying together practices in her upper-caste household, her initial education in Singapore and Cambridge, the strong anti-caste Ambedkarite discourse in Maharashtra, and the Hindutva politics in India. Through five chapters, Sonalkar makes two broad arguments: first, that what she identifies as Brahmanical Hinduism has an inherent penchant for violence, particularly against women and Dalits; and second that Hindutva is sustained on two simultaneous processes of otherization of the ‘internal inferiors’ (Dalits and women) and the ‘external enemies’ (Muslims). Unlike Tharoor or Pethe’s attempts at ‘rescuing’ Hinduism from Hindutva, Sonalkar argues that there are inherent inequalities in Hinduism along caste and gender lines, which in turn form the foundation of and fuel the violence of Hindutva, and herein lies her rejection of her identity as a Hindu woman.

Sonalkar begins her account with the normative ideal of a Hindu woman as outlined in the Manusmriti—imagined in roles of daughter and wife, firmly within the bounds of the household and kin networks. Sonalkar then goes on to trace these ideals through the later Puranas, to the popular mass media of vernacular novels and television serials, showing how the Manusmriti’s  prescriptions of the woman and the family have been transmitted and internalized in the caste-patriarchal Hindu society. It is against this backdrop that she gives the readers a brief overview of her own family. Sonalkar frames her first critique of Hinduism through the lives of her parents, contrasting the spaces sanctioned to men and women in norm and practice in Hindu society. She critiques specifically the ritual exclusion of women based on notions of ‘pollution’, and the patriarchal institutions and environment that bind women to households and unhappy marriages, while at the same protecting the ‘benevolent patriarchs’ from confrontational questioning. She sees the cracks in her own family and personhood as a direct result of the caste endogamy and caste patriarchy that shape ideas of a family unit.

From the second chapter Sonalkar weaves in political commentary, beginning with the discourse of war, which she argues is inimical to both Hindutva and Hinduism. Sonalkar compares the Hindutva war hysteria around events like the Babri Masjid demolition and the 2019 Pulwama attack, with the moralist justification of fratricidal war in the name of dharma in the epics, especially the Mahabharata. Sonalkar frames her theorization that the common ground between Hindutva and Hinduism lies in identifying the enemy ‘within’ and the ‘external threat’–whether it is Indian Muslims in general, and the Muslim male in particular, or even individuals and groups who publicly question, shun, and resist Hindutva politics.

This theorization is also poignantly reiterated in Chapter 5, where Sonalkar makes the argument that Hindutva’s violence against Muslims and Dalits is in continuation of the violence sanctioned by Hinduism to protect the hierarchical structure and control of the upper caste male, as well as keep the Hindu woman in check. Thus for example, she points out how the Ramayana’s sanction for punishment by violent disfiguration (particularly of Surpankha) became central to the Hindu imagination and now manifests in a not irregular occurrence of men cutting their wife’s noses on suspicions of adultery. Throughout, Sonalkar’s perspective is enriched with empirical value with her on-ground focus and experience in Maharashtra as an educator who regularly engages with anti-caste activists and discourse.

While Sonalkar does acknowledge that patriarchal norms exist in all religions (Chapter 3), she makes the case that caste patriarchy, or Brahmanical patriarchy, with its insistence on endogamy, makes Hinduism more oppressive than others. In this system of Brahmanical patriarchy, Sonalkar looks not just at Hindu women, but also Muslim women as subjects of the Hindutva discourse–at once supposedly oppressed by Islamic norms and forced polygamy while also a reproductive body burgeoning the nation, as well as a subject of desire that would lead Hindu men astray from their religion.

While Sonalkar’s account echoes a certain romanticization of ‘secular foundations’ of independent India shared by upper caste feminists, she stands out by stating that not all social groups share the sentiment. Despite secular safeguards, protected and mandated by the Constitution, Hindu nationalism has remained alive and well, in the public and political discourse in both pre- and post-Partition India. The hypothesis laid by Sonalkar in the introduction, that Hinduism is ‘always inflected by caste’ (p. 6), is substantiated throughout her chapters in examining the everyday practice of Hinduism, in both private and public spaces: she poignantly asserts that ‘the everyday declaration of one’s religion is also a declaration of one’s caste’ (p. 133).

The most valuable contribution of Sonalkar’s account lies in her documenting both the privileges and challenges of being an upper-caste woman. While a small but growing body of writings by Dalit-Bahujans documents the everyday violence and humiliation inflicted on the ‘lower’ castes, the same discourse has also argued that caste is equally about privilege as about oppression, and hence it’s important to recognize and write about the privileges accrued by the ‘upper’ castes across generations. In engaging with the history of her own caste, Chandraseniya Kayastha Prabhus, tracing its initial support of the Ambedkarite anti-caste activism and then transforming into a support base of Shiv Sena’s militant Hinduism, Sonalkar compellingly argues that despite changing social, economic and political circumstances, the caste system has flourished because of the desire for upward mobility among middle castes and their internalized contempt for the lower castes. Why I am not a Hindu Woman thus makes an important addition to the anti-caste corpus of literature by bringing to the fore a reflexive understanding, and a feminist critique, of the caste-patriarchy.