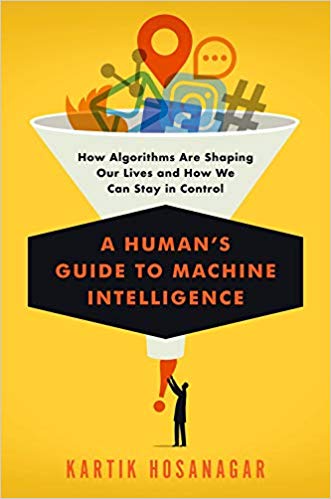 A HUMAN’S GUIDE TO MACHINE INTELLIGENCE: HOW ALGORITHMS ARE SHAPING OUR LIVES AND HOW WE CAN STAY IN CONTROL 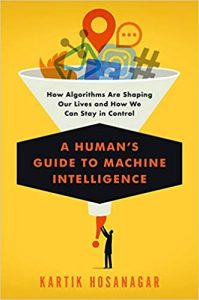 Kartik Hosanagar’s book A Human Guide to Machine Intelligence explores an important dimension of technology in recent times. Hosanagar is a Professor of Technology and Digital Business Studies who critically engages to fathom the rise of Artificial Intelligence (AI) based on algorithms.

The book is shaped in the background of two chatbots Xaiolce and Tay.  Xiaolce is a chat bot created in the avatar of an eighteen-year-old girl by Microsoft Company to entertain people with stories, jokes and casual conversation that was launched in China in 2014. She was a cute personality and attracted 40 million friends on WeChat and Weibo.  After the success of Xaiolce, Microsoft launched Tay in USA in 2016, and suddenly within twenty-four hours it had close to 100,000 interactions with other users. Its tweet, announcing ‘Hello World’ soon turned into extremely racist, fascist and sexist tweets. The algorithm that controlled the bot did something that no one in its programming team expected it to do—it took on a life of its own. Microsoft suddenly shut down the project website. Now, the question is, how could two similar algorithms designed by the same company behave so differently––inspiring love and affection in the case of Xaiolce, and hostile prejudice in the case of Tay?

In this context, Hosanagar’s concern is to comprehend how Artificial Intelligence represented a certain kind of opportunity for human progress and also unpredictability and threat. And hence, ‘What steps should be taken by the end users?’ Therefore, this book addresses three questions. Firstly, what causes algorithms to behave so unpredictably, in biased and potentially harmful ways? Secondly, if algorithms can be irrational and unpredictable, how do we decide when to use them? Thirdly, how do we as individuals, who use algorithms in our personal or professional lives as a society, shape the narrative of how algorithms impact us?

As Hosanagar admits, he is a firm believer in the immense potential of algorithmic decision-making and also trying to see how algorithms can at times be surprisingly unpredictable, especially AI that enables autonomous decision-making.

The book is divided into three parts with ten chapters. Part one, ‘The Rogue Code’, which has two chapters, ‘Free Will in an Algorithmic World’ and ‘The Law of Unanticipated Consequences’. This part explores how much of our lives are shaped by the decisions we make online, whether through searches on Google, connecting with friends on Facebook, or shopping on Amazon. Algorithms exert a significant influence on precisely what and how much we consume, whether it is consumer product in Amazon, movies on Netflix or posts and articles on Facebook. The algorithms are not just selecting the media we see on social networks, but are also silently determining the network itself to keep track of who we allow into our personal and professional lives. It also addresses the issue of unanticipated consequences, such as Google’s Autocomplete Keyword tool, to stress on the point that most of us take the ‘Autocomplete’ algorithm for granted and that we are hardly conscious of the feature when we use Google.

Part two on ‘Algorithmic Thinking’ has four chapters. It covers ‘Omelet Recipes for Computer: How Algorithms are Programmed’; ‘Algorithms Become Intelligent: A Brief History of Artificial Intelligence’; ‘Machine Learning and the Predictability-Resilience Paradox’; ‘The Psychology of Algorithms’. It focuses on the inner workings of algorithms and how they come up with those often quirky and sometimes brilliant recommendations, and how simple design choices can have unintended results. It also highlights that one way to create digital neighbourhoods is by organizing webpages by category. It also initiates discussion on historiography of Artificial Intelligence. The advent of the Internet meant relatively easy access to large datasets that could be used to train machine learning algorithms. It also highlights that as machines become more intelligent and dynamic, they also become more unpredictable. This suggests a fundamental conundrum in algorithm design. You can either create intelligent algorithm in highly curated environments or expose them to messy real-world data to create resilient, but also unpredictable algorithms. Kartik calls this predictability-resilience paradox.

Part Three, ‘Taming the Code’, has four chapters: ‘In Algorithms We Trust’; ‘Which is to be Master: Algorithm or User’; ‘Inside Block Box’; and ‘An Algorithmic Bill of Rights’. Part three focuses on the idea of trust and destruct. Kartik argues how the newsfeed experience in Facebook itself was emotionally inconsistent; it did not reflect genuine social interaction with a friend. Instead, the experience was more like watching a movie in which lots of dreams had been packed into the available time.  Facebook newsfeed algorithm already uses rules to determine which posts to show to the users and in which order. He states, let people look inside the black box of algorithm, understand the thinking that is in play, which may pacify their mistrust, hostility and fear. He also questions whether transparency is the major factor in fostering mistrust upon algorithms and suggests ‘An Algorithmic Bill of Rights’ to limit algorithm’s powers and define the ways in which it can be held accountable.

The author argues that the rise of AI involves computers to do all the things that typically require human intelligence, which includes reasoning, understanding language, navigating the visual world and manipulating objects. As modern algorithms have incorporated more AI and machine learning, their capabilities and their footprints have expanded. They now touch our lives everyday, from how we choose products to purchase and movies to watch (Netflix’s recommendations) to whom we date or marry.

Algorithms undoubtedly make our lives easier. At the same time they are also adversely affecting us in ways that are beyond our control. They are constantly changing through the data used to train them, which is invariably having an impact on our individual choices, daily lives and on the society. Kartik sums up that despite all the concerns, modern AI- based algorithm is here to stay.