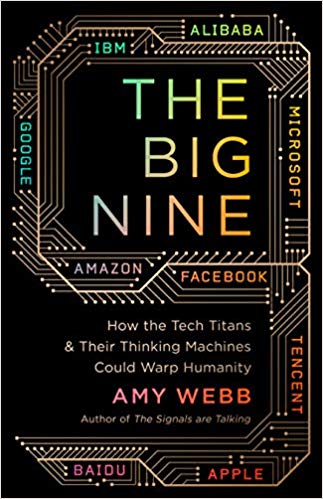 THE BIG NINE: HOW THE TECH TITANS & THEIR THINKING MACHINES COULD WARP HUMANITY 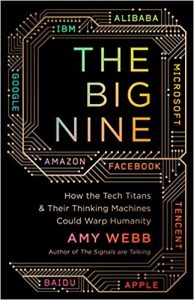 In an eye-opening and timely analysis of the world’s two divergent technological paths, the renowned futurist Amy Webb in The Big Nine: How the Tech Titans & Their Thinking Machines Could Warp Humanity charts out the potential scenarios for an Artificial Intelligence future, pitting the United States and China in direct opposition to each other. Her balanced critique of nine major technology companies of the world—Google, Facebook, Apple, Amazon, Microsoft, Tencent, Baidu, and Alibaba—presents a cautionary tale to champion an ethical blueprint for AI development.

Early on, the book’s most gripping analogy circles around AI’s mastery over professional Go player, Fan Hui. After three rounds of playing the centuries-old Chinese game Go with a computer, ‘[r]eeling from frustration, Hui had to excuse himself for a walk outside so that he could regain his composure and finish the match. Yet again, stress had gotten the better of a great human thinker—while AI was unencumbered to ruthlessly pursue its goal. That brings us to a perplexing new philosophical question for our modern era of AI. In order for AI systems to win—to accomplish the goals we’ve created for them—do humans have to lose in ways that are both trivial and profound?’

Webb’s three-pronged layout of an optimistic, a pragmatic, and a catastrophic potential future gives us three probable paths to answer this question of human-limiting AI. In doing so, she successfully problematizes the small group of people who have amassed disproportionate decision-making power in the process (the AI’s tribe of the Big Nine technology companies) and shows their two global faces—American and Chinese.

By exposing the biases and inordinate concentration of power of the AI’s tribe, she cushions the critique in an ancient philosophical conundrum: ‘Can machines think?’ While Webb’s answer is affirmative, she extends the premise, arguing that machines don’t think like all of us: ‘Thinking machines … need a purpose and a goal. Eventually they develop a sense of judgement … Each soul is a manifestation of God’s vision and intent; it was made and bestowed by a singular creator. Thinking machines have creators too—they are the new gods of AI, and they are mostly male, predominantly live in America, Western Europe, and China, and are tied in some way to the Big Nine.’

Webb’s fresh take on the computer-human dilemma is honest but not belittling, with the perfect vocabulary to describe the new-age phenomenon of a few rulers.

The ‘made by the few, and thus emulates the few’ foundation allows Webb to detangle the misaligned and homogenous values of these few. In the US, they are driven by the market, not by democratic ideals. Technologists, completely lacking diversity, whose motivation to build fast and ask for forgiveness later is seen in far too many recent examples, notwithstanding the now-infamous Cambridge Analytica scandal.

While the in-depth depictions of those in the West paint Americans as well-intentioned, Webb’s exploration of Chinese values often comes off as shallow and stereotypical, and while she may say she doesn’t consider the Chinese model as ‘evil’, the book falls into easy vilification rather than a genuine dive into the country’s government-driven AI strategy. In essence, Webb’s map of the world draws a US image of government and companies not working together well enough towards democratic goals and another Chinese image of government and companies working together too much towards undemocratic goals.

On top of the surface level understanding of China, one has to wonder if Webb dilutes the close relationship America’s deep state has with US Big Tech. If leaked top-secret programmes are not enough evidence, America’s government-led trade negotiations with other countries, including India, are clear extensions of American corporate concerns. In addition, although outside the scope of the book, Webb nonchalantly categorizes India as leaning towards the Chinese model—a disputable claim given the complexity of ongoing political-technological development in India. With this in mind, Webb’s portrayal ultimately does accurately describe the US as a country with far more moving parts in varying directions than the well-charted Chinese development path.

And, Webb is undoubtedly correct that US Big Tech—what she calls G-MAFIA—makes decisions and therefore, makes AI that is optimized for the market, instead of humanitarian values. With little government funding and no forethought in planning, G-MAFIA has to succumb to the pressure of the latest earnings call and the hype of the next conference showcase, instead of viewing AI as a public good. Even more, a lack of ethics in education and hiring further perpetuate the problem.

To negotiate what optimizing for humanitarian values looks like, Webb has two bullet point lists on pages which a reader will inevitably keep flipping back to as AI continues to make headlines. One, midway through the book are the questions AI’s tribes should be asking themselves, and another, is there a ‘The Human Values Atlas’ or code of ethics that AI development should follow. This well thought out list includes questioning AI’s motivations for humanity, the overlooked biases of the developers, citizen’s ability to interrogate AI’s path, how to view AI in comparison to human intelligence, and AI’s interaction with human emotion. The Human Values Atlas urges the Big Nine to prioritize safety over speed, to be transparent, to own their responsibility, to protect themselves from authoritarian regimes, and to be decentralized.

In its essence, Webb envisions a world where AI is optimized for empathy, not the market.

Webb plots a timeline of roughly seventy years in which we will achieve not just Artificial General Intelligence (AGI, as opposed to Artificial Narrow Intelligence, or ANI) but also an explosion of unpredictable Artificial Super Intelligence (ASI). Development of evolutionary algorithms and recursive self-improvement allow AI to keep generating new combinations to solve problems in expounding ways, without human input or understanding.

In an optimistic scenario, the US government funds AI so it can be developed for societal goals, not profit. Individuals own their Personal Data Record (PDR), enjoy the conveniences of predictive decision-making, trust those in power to surveil them, and don’t mind limited human interaction. AI is not judged in comparison to human intelligence, but in its own vertical, and its development is constrained for safety.

Pragmatically, what could happen is that US ignores China’s development, continuing to focus on sexy AI. Without clean data, Wall Street pressures companies to release products before they are ready and customers still expect perfection. Individuals have difficulty porting their PDR between companies, trapping them in a two OS systems of Google and Applezon (Apple and Amazon merged). Rich people pay for their privacy, and a ‘digital caste system’ emerges. AI’s nudging tactics for our better health devolves into nagging. Companies are financially forced to cooperate with China, Facebook’s failed business is sold bit by bit to China, along with our data, and China repurposes Baidu’s brain-machine interface for the military to occupy the US, turning it into the ‘Digitally Occupied States of America’.  All the while, China is caricatured as inherently evil, and the US is deemed sloppy, with backfiring laws and little coordination.

And that was not the worst scenario. In the truly catastrophic path, US retreats in worldwide influence, while China has made its way to Latin America. Again, Americans are not malicious but just unaware, brainwashed by the political cycle and Sunday morning talk shows. A transactional relationship between G-MAFIA and the government is not in the national interest, while China is able to hack into G-MAFIA devices, sowing distrust between the American populace and their companies. Blue workers unexpectedly keep their jobs, but knowledge workers are out of work. Humans crave human connection, nanobots enter our body reeking havoc like automatic abortions, and the world is nothing like we could have imagined.

The dystopian portrayal would leave us depressed without Webb’s most fruitful, last chapter, where she outlines concrete steps to achieve the optimistic scenario. Her most concrete takeaways include an international body Global Alliance on Intelligence Augmentation (GAIA) based in Montreal that develops a Human Values Atlas and an Advanced Cyber Security Center (like the World Health Organization) that develops sentinel AIs to test the implications of AI. These steps are aimed to maintain interoperability and citizen ownership of data, to slow down the progress of AI by design, to get governments to genuinely understand AI and the Chinese threat to world order, and to integrate questions about ethics into hiring and teaching.

While Webb’s book presents an all-encompassing ethical guide sheet, there is not so much as one needs to be convinced that we can get there. Webb says regulations are usually too specific and become outdated, but how will the ethical standards be enforced? ‘The Big Nine aren’t the villains in this story, in fact they are our best hope for the future.’, she states. It leaves one to wonder: even with increased government funding and less Wall Street pressures, is the goodwill of the G-MAFIA enough of a force to achieve an optimistic AI future?
Karishma Mehrotra is an Indian-American journalist who moved to India to explore the tech beat from a social/political angle. Currently she is a technology reporter for The Indian Express.