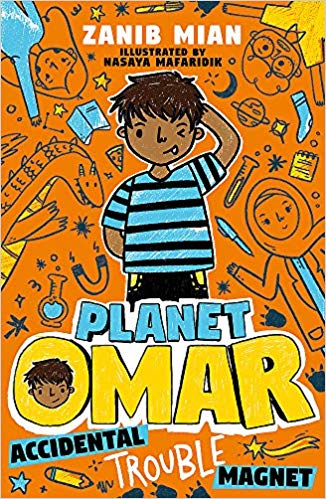 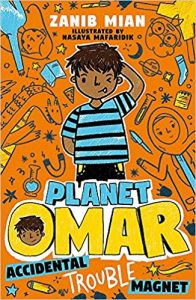 Omar has moved to a new town with his family of super-genius parents, tantrum-throwing sister and a little brother who ‘has ants in his pants’. Moving entails a number of changes—new school, new friends, new neighbours, leaving behind some old toys and Omar doesn’t seem to like it. He gets woken up by nightmares of a teacher who has green slime oozing out of his ears, chasing him and feels snakes in his tummy. Tough spot to be in but he successfully wades through these struggles using his imagination.

On the first day at school, Omar befriends Charlie, who is soft hearted. Omar likes everything about the school, especially Mrs Hutchinson whose curls change shapes with her mood, except Daniel who bullies him and Charlie. Omar calls a dragon, H2O, for help in dealing with Daniel and laughs away his menacing. On the inside, Daniel and his words make him cringe and he is unable to discuss it with his family, particularly his threat that they (Muslims) were soon going to be deported (to Pakistan). This ghostly fear of deportation haunts him till the end of the book. At home, the family discovers that their neighbour—a grumpy old lady, Mrs Rogers, is not pleased with her Muslim neighbours and keeps complaining about something or the other over the phone. She doesn’t like their food or the kids making noise while playing on the lawn.

For Omar, Daniel and Mrs. Rogers are initially the most hostile people he knows. Through these two characters, the book puts forth the popular stereotypes about Muslims in the media and their decimation as the book proceeds. Their transition from meanness to amicability is amusing as well as smooth, and free from negativity. From refusing to take food from her Muslim neighbours, Mrs Rogers happily joins them for Iftaar (Time of breaking the day-long fast during Ramadhan). Daniel is a little rugged but coming face to face with a zombie and having Omar to rescue him changes his heart.

A mix of illustrations and texts makes the book appealing, engaging and triggers a train of imaginative thoughts. Being set in a Muslim family gives room to the writer to describe the day-to-day lives of Muslims and simplifies the practices that are usually seen as difficult to follow from an outsider’s perspective. The author, Zanib Mian, has written several children’s stories that have Muslim characters. Doing this, she believes, enables her to break the stereotypes against Muslims and create characters that Muslims can relate to. This book was written post rise in bullying of Muslim children at schools in Britain and deals with the subject with extreme sensitivity, making one see the dilemmas children face when dealing with difficult situations through the lens of Omar as well as Daniel. Mian originally wrote the story of Omar in a book The Muslims which was thoroughly appreciated and won the Little Rebels Award. This encouraged her to expand the story into a longer novel that had more details about other characters and events.

Omar learns a basic lesson in empathy on his own through his experiences without anyone explaining it to him, making it more authentic. The narrative ties all the open threads towards the end but the style of narration is so exhilarating that it keeps the reader wanting to read more about Omar’s thoughts and experiences. The book delivers on its promises to make the reader laugh so hard that snot would come out of their nose. It goes a step ahead in navigating emotions, feelings of children and their decision-making.

The book deals with sensitive issues and will require parents to have their children reflect on the questions it raises in their minds and their experiences which they can relate with those in the book. However, the way the book brings out these issues and the issue of diversity makes it an essential read for children to understand and accommodate those they feel are different from them.

Arshi Showkat is a research scholar at Jamia Millia Islamia, New Delhi. Her areas of interest include gender and law.