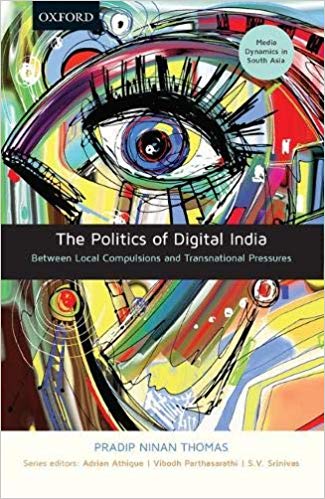 THE POLITICS OF DIGITAL INDIA: BETWEEN LOCAL COMPULSIONS AND TRANSNATIONAL PRESSURES 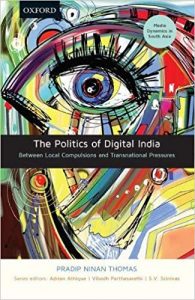 Any sincere academic work on India’s digital eco-system faces two major risks: first, the digital landscape changes faster than you can deploy your research tools, and secondly, your observations and conclusions are outdated by the time your hard work hits the book stores.

As an economic slowdown adversely impacts India’s rural economy, tele-density in the villages is already showing signs of receding. This is the big ‘bottom of the pyramid’, which spawned many business dreams, and plans of multinationals and Indian companies alike.

In addition, stung by international reaction to its authoritarian clamp down on communications in the State of Jammu and Kashmir, the Central Government has told the Supreme Court that the social media is a ‘possible threat to democratic polity’, warning the American tech behemoths who are the largest players in the Indian digital and social media based economy.

So both the ‘Digital’ and ‘Politics’ have changed since Pradip Ninan Thomas undertook the research work and wrote The Politics of Digital India: Between Local Compulsions and Transnational Pressures. But the author adroitly avoids the two risks mentioned above due to his wide canvas and precision of his thought process. The book is like a ride where you get a good view of the milestones and where the road is headed.

India is the largest digital market by volume in the world as the Chinese digital market was developed, and lives, in a walled garden. As the global digital market is dominated by the US based companies, India’s government and private digital properties are using American technological infrastructure and are vulnerable to misuse of the data stored in US servers. Most of these companies have now deployed Indian engineers at the top of their decision-making processes both in the US and in India as an operational necessity. Some of them have achieved a superstar status among Indian youth and are patronized by the top Indian leadership publicly. Thomas forcefully highlights the threats of Indian reliance on US companies while developing nation-wide governance architecture for a population, which is complex, vast and varied. He illustrates how the Indian political leadership—brazenly supported by government agencies like the NITI Aayog in the garb of advancing economic reforms—is pushing the digital agenda down the throat of a country where 60% people are still dependent on agricultural economy and more than 40% are disconnected. Worse, 60% rural women still do not have access to any connectivity.

In theory, it may sound like a scholarly exercise in studying digital macroeconomics, but in practice, it has already begun to show disastrous consequences. Aaadhaar for example has now been linked to many government subsidies—from fertilizer distribution to bank accounts—as a result only those can benefit who are connected.

In the urban scenario, the government has begun to extend facilities on an ‘Application Based Infrastructure’, so if you are not connected you may not be able to use the government launched apps—from police helplines to student scholarships. This is a classic example of punishing the dispossessed.

The chapter on ‘The Expansion of Politics of Control’ is a warning on how sectarian politics can dictate and destabilize democratic institutions in the world’s largest democracy. The author cautions that the Hindu Right-Wing groups like the Bajrang dal and Vishwa Hindu Parishad are pushing their religious agenda on governance tools like the bureaucracy and the judiciary. Since these organizations now have sympathizers among the political leadership, they can use the data collected by the government from the citizens for partisan ends. The clampdown on communications in Jammu and Kashmir—the only Muslim majority area—is a case in point. Another socially combustive issue simmering is the National Registry of Citizens (NRC) being prepared in the North Eastern States of the country, which has led to sectarian tensions, and controversial detentions of citizens. The author raises a red flag here about India’s weak privacy laws, which help the governments and organizations close to the political leadership in power to misuse mass data.

Another major issue raised by the book is about the future of India’s agriculture. With big data and artificial intelligence available, agricultural landscape and crop patterns can now be digitized and global grain, fruit and vegetable production anticipated turning India’s agrarian economy into a giant lab. The book provides a rare peep into the seedy business of seed farming and the global push towards genetically modified crops by multinationals. This can destabilize Indian agriculture practices, which sustain nearly two-thirds of the population. Agriculture in India is more than a means of livelihood; it is a way of life and a complex mosaic of caste-based system still thriving on political patronage. Any sudden disruption here can lead to a violent social backlash and migration of large sections of communities, which can be disastrous. But in the name of modernization and agricultural reforms, the government is ignoring early smoke signals of looming distress in the hinterland.

The book provides what we need most in India today—A2K. Access to knowledge about the geopolitics of digitization; its connections to financial technology firms; their relations to international internet governance; the shift in global order and its impact on geographies and societies—are all subjects being discussed at global fora. The popular media is only skimming the surface of these subjects within its limited remit of commercial viability. Its focus is mainly financial successes rather than the long-term ramifications of the effects of Digital India.

In the book, Pradip Ninan Thomas ignites several theories, which can be starting points to further research and reportage. The Politics of Digital India needs a follow up in several directions to disseminate more and better understanding on these critical areas. The debates and discussions on the political economy of the future of Indian state described as ‘polymorphous’ within the book can determine the future of the second largest population on the planet.

Pankaj Pachauri is an Indian TV anchor and journalist. He is the founder and editor-in-chief of Gonews, India’s first app based TV News channel.